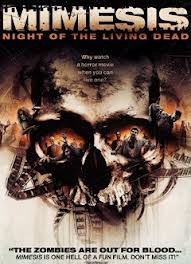 Considering how many "Night Of The Living Dead" knock offs exist, one is only smart to just assume that a film using the revolutionary horror flick in the title is trying to garner a quick buck. Luckily I stumbled upon the film as a free rental from the local library (?!) so I couldn't turn it down. "Mimesis" is a film greater in conception than in execution. Horror fans might find a few things to enjoy, but make sure you turn off your thinking caps before going in or the film is going to frustrate you.

Duane (Maldonado) and Russell (Piedmont) might have had their disagreements about the state of horror films and their relevancy as art, but an exclusive invitation to an after party has them finally agreeing on one thing - it had the potential to be awesome. That is until they wake up the next morning confused, isolated at a farm house, and in costumes. They seem to be in a re-enactment of the original "Night Of The Living Dead" and the zombies are on their way, but is it really the dead rising or some kind of elaborate hoax?

Originally I thought the idea was a somewhat clever meta style concept, but I'm guessing that it looked much better on paper than it came out on film. Part of this is due to the fact that all of the "players" who are living out the horror film are horror fans...and spend a good portion of the film running around like chickens with their heads cut off. Would you really think that the dead are returning back to life if you all happen to be in a house and costumes pulled straight from the "Night Of The Living Dead?" Or that somehow they all seem to be unable to count how many zombies there are out there? The silly things and decisions that characters make in this film for the sake of keeping the plot 'scary' are laughable half of the time and really pull away from the entire experience. This clever idea, one that's built on nicely in the first portion as we lead up to the actual 'event', is only partially conceived and often comes out as half baked as it seems.

Execution wise, "Mimesis" looks pretty slick. Considering it's a low budget indie horror, the look and feel of the film feels much bigger than it actually is. Some of its budget shows in the death sequences with the gore and the one explosion the film has, but it didn't necessarily hinder the film. The acting of the roles is hit or miss (as are most elements of "Mimesis"), but really the actors weren't given much to play with in terms of 'meaty' dialogue or strong character motivations. So they get a strong pass due to some of the script's ineptness.

Although there is a clever film built into the foundational thoughts of "Mimesis", the actual film leaves quite a bit of wiggle room for logic and sanity to fall through. It has some moments of intriguing tension and execution (the truck ignition sequence worked quite well for me), but if you try to logistically think the film through you are liable to come out with hemorrhaging in the brain. "Mimesis" might be a fun flick to waste a couple hours on, but even for die hard fans it seems to be more of a time waster than something to seek out and enjoy.

Written By Matt Reifschneider
Posted by DarkReif at 10:53 PM