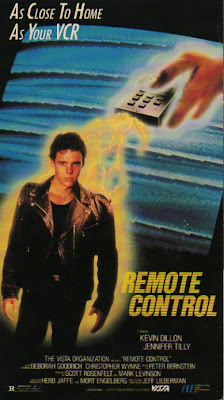 
“Remote Control” is a special film for the VHS generation of film buffs. Made at the height of the home video craze in the 80s, director Jeff Lieberman showcases how much the home video market changed the industry as more people were renting video tapes to watch in the comfort of their home which in turn threatened the future of movie theaters… hard to believe in this day in age. Just as home video threatened the very existence of movie theaters, he turns the concept on its head and has video threatened the very existence of mankind in this loving 80s period piece of science fiction. 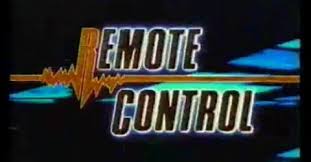 Its death by video tape “Videodrome” style as a new VHS release of a 1950s science fiction film called “Remote Control” is becoming a huge hit in the video rental market. However strange deaths begin to occur and two video store rental clerks (remember video stores?) uncover an alien invasion plot in which infected video tapes send viewers into a murderous rampage. Can they destroy the alien plot, and save a beautiful girl, before the human race succumbs to the horrors of VHS? 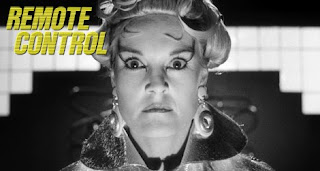 Jeff Lieberman, known for his scrappy late 70s early 80s horror flicks “Just Before Dawn” and “Squirm”, makes an uber over-stylized 80s flick that is a loving tribute to the 1950s science fiction. The 80s fashion is absolutely ridiculous, including silver jackets and mind-numbing hairdos. These outrageous styles weren’t even common back in the day but make the film even more entertaining today. The cast is made up of an impressive young group including an early role for Kevin Dillon as our hero, get this, named Cosmo and a small role for the sexy, squeaky voiced Jennifer Tilly. The plot gets a wee bit convoluted towards the end but the overall 80s style and 50s sci fi throwback score makes it all in good fun and helps viewers overlook the flaws. 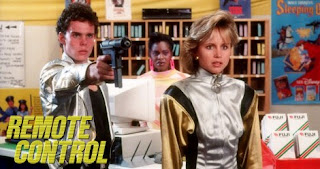 “Remote Control” is going to have a lot of nostalgia value for film buffs of the video store generation and they are going to love pausing the film to look at all the old glorious video box artwork on the video store shelves (I know I did). The outrageous 80s fashion, likeable cast and loving tributes to 50s sci fi films will make sure “Remote Control” belongs on any cult fanatics DVD / Blu-ray shelves. Lionsgate had no plans to release “Remote Control” on digital format (no doubt because of the ‘dated’ plot device utilizing VHS tapes) but director Jeff Lieberman took it upon himself to self-release the film for fans. The factory pressed disc (no DVD-R bullshit) is available on his personal website and is strictly limited to 2000 units (1000 DVD and 1000 Blu-rays), remastered in high definition and signed by the director himself. Take it upon yourself to pick this disc up before it goes the way of VHS… PURCHASE HERE

Written By Eric Reifschneider
Posted by Cronosmantas at 8:47 AM