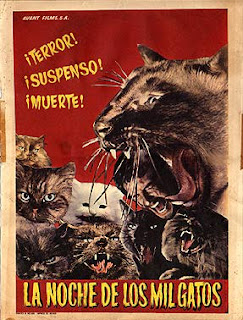 THE NIGHT OF A THOUSAND CATS


With the Mexican film-making team of actor Hugo Stiglitz and director Rene Cardoza (Sr or Jr, either one is equally as bad) you know you’re going into a trashy film made south of the border. However nothing can prepare the viewer for how BAD “The Night of a Thousand Cats” is which truly scrapes the bottom of the barrel of Mexican trash cinema.

Hugo Stiglitiz plays, who else, Hugo, a millionaire playboy who flies, flies and flies around Mexican cities in his private helicopter to pick up bikini clad babes and bored house wives. He takes them back to his ‘castle’ (which is obviously abandoned ruins) where he wines, dines and beds them before he and his bald servant decapitate them to add their beautiful faces into his demented “head” collection and feeding their bodies to his army of hungry cats caged up in a giant pen right off his dining room.
The plot… really there is no plot. Stiglitz and Cardoza only had a vague outline for a storyline about a killer and filmed on the fly, literally, as the film is loaded to max with  long drawn out stock footage of Hugo flying around in his ‘air chariot’ looking for beautiful women. Seriously nearly half the film (30 minutes of its measly 61 minute run time) is boring helicopter footage. If you are unlucky enough to get the uncut Mexican version then get ready for nearly 20 more minutes of flying footage! This is one case where the trimmed U.S. release is far easier on audience’s mental stability.
Stiglitz is as stiff as ever playing the bland, lifeless character he always does (seriously how is this guy so popular in Mexico?). Thankfully the film is basically dialogue free to save us from his horrid acting but there’s equal amount of nonsensical narrative, jerky editing and random cuts to thousands of meowing cats to drive the audience mad.
“The Night of a Thousand Cats” is about as bad as bad can get: no plot, no dialogue, no protagonist, bland lead, choppy editing, loads of flying stock footage and sloppy narrative. All these elements has garnered the film a small, but loyal cult fan base over the years for its sheer ineptitude but there’s no denying the picture is just shit filmmaking all around. In the words of my sister “it’s just over-all a non-movie”. Couldn’t have said it better myself. If you must see the film just to see how truly bad it is then hunt down the Code Red release in a double feature with “The House of Insane Women” as it is anamorphic widescreen and the much needed truncated American cut.

Written By Eric Reifschneider
Posted by Cronosmantas at 9:43 AM