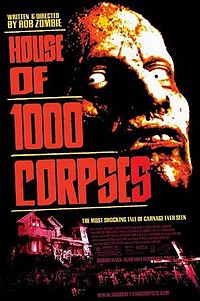 With the release of Rob Zombie's latest film happening, I felt it was time to revisit his previous films for review. So naturally I went back to his break through film "House Of 1000 Corpses." As a long time Zombie fan (been listening to him as a musician for years prior to the release of this film), I was stoked when this film came out. The guy obviously knows his horror past and I wanted to know what he could deliver as the future of horror. Turns out his debut film is a mixture of both and one that exemplifies style over substance...not always in the good ways.

When two couples, on a road trip through the back roads of America, stumble upon a roadside attraction run by Capt. Spaulding (Haig) they learn about the mystery of Dr. Satan and decide to go visit the tree he was hung on. The backwoods family that finds them though may have other plans for Halloween night...

Rob Zombie cakes this film in style and obvious nods to cult film history. I seriously mean that it looks like he vomited massive amounts of random homages all at once in the run time of the film. As a film fan, that is one thing that "House" has going for it - playing a 'name that style' game with your horror buddies. Zombie LOADS the film to the brim with iconic style from giallo coloring and zooms to the obvious plot that's pulled straight from the 70s in films like "The Hills Have Eyes" or the original "Texas Chainsaw Massacre." Even the casting is more for cult film fans than for people that actually fit the roles - although Bill Moseley owns his character with piss and vinegar - and you get to see a couple of now famous actors (Rainn Wilson and Walton Goggins) in some smaller parts. The film oozes with eclectic jumps of frenzied awkward monologue driven transitions and the plot only gets crazier and more random as it goes culminating in a full on nightmarish ending. If there was a trip into the odd psyche of Rob Zombie then "House" has to be it.

Too bad there lacks any sort of cohesion to make any of it work. While the off kilter style, the bat shit crazy characters, and random plot tangents might carry a bit of charm at times, once you strip back the cartoon outlandishness "House" is a hollow and confusing film crafted by a writer and directer still trying to find his footing. The plot has way too much going on - including a finale that's supposed to mirror Alice falling into the rabbit hole, but comes off as a music video fever dream of ill narrative - and we never establish enough connection with any of the protagonists (of which there are far too many) to really care about their plight.  There is visual flair and fun violent moments, but the film simply lacks depth.

Is "House Of 1000 Corpses" fun? Absolutely. It's ripe with some over-the-top black humor and it's memorable for all of its homages. Ultimately though it is also quite the hollow film experience and lacks the logic and depth needed to work. As a debut film, it carries a distinctive Zombie stamp to it, but it could have been stronger overall.