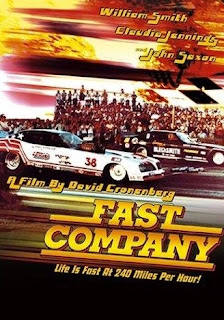 
Most cult fans are going to have the same reaction – “David Cronenberg directed a drag racing flick?”. I know I sure did. Between his bodily horror classics “Rabid” and “The Brood”, Cronenberg helmed this seldom seen racing film in order to raise money for his dream project, which at the time was “The Brood”, a horror film that mirrored the dark occurrences going on in his personal life at the time. I ended up avoiding the film for many years, despite owning the damn thing, due not being a gear head and for the fact it was a film that didn’t fit the typical Cronenberg mold. Finally blowing the dust off my DVD to give the film a shot I was pleasantly surprised by how much I enjoyed the flick despite not having a passion for racing. 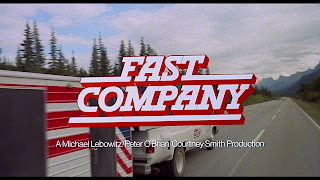 Famous drag racer Lonnie 'Lucky Man' Johnson (William Smith) is getting fed up with his boss and sponsor(John Saxon). His sponsor is a arrogant, slimy mother fucker that takes kick-backs behind the scenes and doesn’t want his team to go the extra mile to win. So he fires Lonnie replacing him with his rival racing outfit… but that doesn’t stop Lonnie and his team as they steal their own drag racer in order to get vengeance on the raceway, even if it kills him. 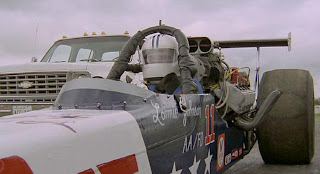 The film is praised by racing fanatics for being an accurate portrayal of the sport but that point is moot to me as I could care less about racing. I did enjoy the simple, western-themed plot as it is basically a shoot-out on the raceway. The cast is also great with genre legends William Smith, John Saxon and Claudia Jennings, three names that are sure to attract a few cult film fans. Saxon just owns the role as the shady sponsor and though I normally love Smith I found his portrayal as the hero lacking. He was born to play villains and this was the first time he played the protagonist and proved he should stick to the dark side. Jennings (her last role before tragically dying in an auto accident) is rather wasted as the love interest but her sole purpose is to provide eye candy and she provides it well. 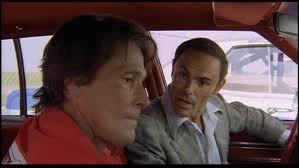 Despite not being a gear head or a fan of the drag racing phenomenon, I ended up enjoying “Fast Company” far more than I thought I would. The likeable genre cast and simple ‘good vs. bad’ western plot kept me enjoyed throughout. “Fast Company” is definitely the black sheep of Cronenberg’s directing filmography and it’s far from his best film, but it’s still is worth a watch even for the simple fact as a curiosity piece for fans of the talented director.

Written By Eric Reifschneider﻿
Posted by Cronosmantas at 4:37 PM