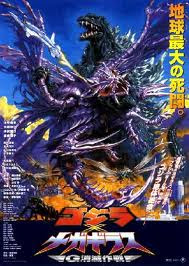 
Toho made a successful reboot (the second time in the franchise) with “Godzilla 2000” in order to apologize for the craptacular American remake that raped the “Godzilla” name and quickly followed it up with “Godzilla vs. Megaguirus”, the second in the Millennium era of the franchise and 24th overall. Originally going to have an American theatrical release it was quickly scrapped when “Godzilla 2000” failed to attract American audiences to a ‘true’ “Godzilla€€" film. It was probably for the best as this entry is hands down the worst entry into the Millennium era of the franchise and the most disappointing since “Godzilla vs. SpaceGodzilla”.

For some reason Toho decided not to make a follow-up story to “Godzilla 2000” and instead decided to ‘reboot’ once again and make a direct sequel to the original 1954 “Godzilla”. Seriously why the fuck wouldn’t they have continuity?! Well it seems the military is developing a ‘black hole’ weapon to kill Godzilla (yes you read that right) but when they test the weapon, a huge insect comes through the hole and lays an egg. A young boy unwittingly throws the egg into the sewers where it hatches. The resulting insect kills some people before laying tons of eggs and before you know it Japan is swarming with the damn things. Once the insects get a sample of Big G’s blood and  inject it into a large egg they create the monster of the title, a fast ugly son-of-bitch to give Big G a run for his money in conquering the world.

Though the plot of Godzilla fighting another monster is getting really tired by this point, my main beef is the overall look of the film. It just reminds me of a SyFy channel original that just happens to have Godzilla. The special effects are even below par for a "Godzilla" film with some really crummy CGI for insects and a swimming Godzilla. In praise I did like how graphic the kills were by the insects (reminiscing more of a horror film) and the ridiculous idea of a ‘black hole gun’ was at least an attempt to change things up a bit than just having the military fire tons of missiles. The insects also are a tie back to the 1956 film “Rodan” where they first appeared so fans of the franchise will appreciate the connection.

“Godzilla vs. Megaguirus” is a tired entry into the 'mega'long franchise no doubt detrimented by a hurried production due to the success (in Japan at least) of “Godzilla 2000. A few notable items in the story isn’t enough to make up for the SyFy channel look, lower tier special effects and tired plot devices, not to mention the most ridiculous Godzilla attack since the tail slide in “Godzilla vs. Megalon”. You’ve got to be a hardcore “Godzilla” fanatic to truly enjoy this one. Thankfully the Millennium era of the franchise would only get much better from here.

Written By Eric Reifschneider
Posted by Cronosmantas at 6:40 PM