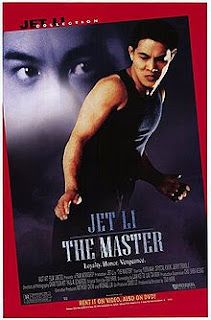 I'm not one to fully defend what Dimension Films did to the martial arts films they released to capitalize on the successes if Jet Li in the early 00s, but without those mass releases I might not be the kung fu fan I am today. Yet, I had never seen "The Master," one of those horrible chopped up films, until now. Although the film lacks a logical plot and character work, it was hard not to be entertained by its ridiculousness and silliness. At least that's something, right?

Jet (Jet Li) has decided to finally come visit his master who has been doing herbal medicine in LA. The problem is that his master (Wah Yuen) has been targeted by one of his old students (Trimble) and has had to flee and hide from his abode. This leaves Jet high and dry looking for his master and on a collision course with a villain he's never even met before.

What makes this film so interesting is that it was one of the first team ups of Jet Li and director/writer Tsui Hark. It was actually filmed before the rise to stardom of Li in "Once Upon A Time In China," but due to mixed feelings about the film it didn't get a release until later. To be honest, its pushed back release makes sense. The film never really feels cohesive and motivations for everything are missing. The villain's intentions in killing all of these martial arts masters is ill conceived (unlike his awesome mullet) and the weird relationship between Wah Yuen's sifu and Li's student characters seems forced half of the time. They brush over some things like Li's fear of change and it really justifies nothing. Not to mention some of the humor related to these character traits are complete misses based on silly cliches. The characters might be fun, but rarely do their actions or intentions strike a note with the viewer.

It does, however, display that great modern kung fu vibe that martial arts films started using in the 80s and 90s where they threw classic elements into modern settings. Although the Jackie Chan vehicle "Rumble In The Bronx" would tighten and strengthen this notion a couple years later, it's hard not to be entertained. The villain might not make sense, but he's a great counter to Li's hero and the ensuing fights between the two are awesome. Unfortunately, some of the secondary fights tend to be a little goofy, including a brawl between the three Hispanic friends and the villain's students, but overall it does have some great moments.

"The Master" is simply an incohesive film with little depth that works and a plot almost seems too random to serve the narrative. An odd and pretty violent gun fight in a bus towards the end that seems to come out of the blue is the perfect example of this. It's a fun film, but one that never rises above being a popcorn kung fu flick.