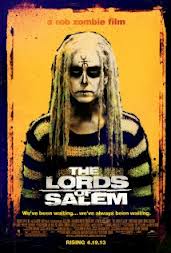 Despite my love for Rob Zombie, let's just say that his film output has been mixed at best. Mixed if you don't count the atrocity that was "Halloween II." So when the trailers for "The Lords Of Salem" perked my interest, I made sure to keep a healthy dose of skepticism in my pocket just for this review. Now I can safely say that  "The Lords Of Salem" is not only Zombie's best feature film, but it's actually a good movie overall. Of course the film does have some issues on the bigger scope, including an ending that made little to no sense at all, but generally speaking "The Lords Of Salem" was an intense, atmospheric, slow burning decent into hell with some strong visuals to go with it.

DJ Heidi (Zombie) has been broadcasting radio on the Salem underground scene for quite some time. She's a cult favorite, so when a mysterious vinyl shows up from a group called 'The Lords' she plays it on the show. Then she begins to see things. To feel like she is destined dor something horrible. But is it just the music or something else entirely?

I have to admit, overall I loved "The Lords Of Salem." Rob Zombie really takes his over the top style down a few notches and focuses on delivering a film built on grounded characters and strong visual presence. His writing may not be as obviously quirky or near as dark humor tinted, but it's tighter and far more realistic. I was just impressed that he wasn't dropping f-bombs every other word. So that's a plus. Not only that, but I cared about our protagonists which is also a Zombie first. The story might be simple, definitely pulling from the book of 70s horror in long static shots and taking the time to set up the tension, but it is much more effective than the overabundance of goofy characters and needless sub plots that his other films use.

Visually, the film cakes on the atmosphere like nothing else. There is almost a texture to the set designs and visual choices you can feel. There is that distinctive Zombie throwback culture in there (look at the pictures on Heidi's walls for example) and the film exists in an odd world caught between the 70s and modern day. Zombie also takes his time to build to the more brutal violence and horror, starting with subtle visual scares before eventually succumbing to a finale that erupts in Zombie's random cuts and visuals (with enough nudity to even make me blush)  that by the end of the film I felt like I might need psychiatric help.

Unfortunately, it's the last 15 minutes that sort of ruin the experience of the film for me. "The Lords Of Salem" had me completely enamored until this point. Although I had a tough time swallowing Sheri Moon Zombie as the lead, the film's strong atmosphere and slow burn decomposure made up for it...until it got too weird. At this point, and I'm trying not to spoil the fun for those curious, the film essentially abandons most of its grounding and goes straight into insanity. Characters straight up disappear, there seems to be little in the way of finishing some of the plot lines, and it focuses on being a bat shit crazy visual perfect storm.

Until that point, I was sold. "The Lords Of Salem" is easily the most coherent and impressive effort from the old school film buff. Despite some small flaws (and an ending that made no sense) I enjoyed the hell out of this film. It was intense with its scares, fun with some of its supporting cast (everyone loves Ken Foree!), and impressive visually speaking - even of half the time it's a nonsensical Italian giallo style. It comes highly recommended for those looking for a bit of an artistic horror experience. It most certainly divide its audience (Zombie has always beena 'love ot or hate it' filmmaker), but it needs to be seen to make that decision.

BONUS BLOODY PRAISE: The score by John 5 is a stunner of residual sound and low key ambiance. Easily compliments Zombie's film to a 'T'.