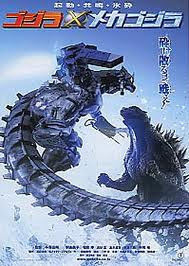 
Audiences loved the last entry “Godzilla, Mothra and King Ghidorah: Giant Monsters All-Out Attack” so Toho decided to keep with the formula by mimicking the 90s era of the franchise and re-inventing classic Godzilla monsters. Here it’s Mechagodzilla for the third time in the franchise as a whole. Much like the 1993 entry “Godzilla vs. Mechagodzilla II” titling became a problem so instead of calling it “Godzilla vs. Mechagodzilla III” for stateside release, they changed the wording a bit to “Godzilla Against Mechagodzilla” but even this title can cause some confusion. Titling issues aside this is a bad ass modernizing of one Godzilla’s greatest foes.

The plot is a reboot AGAIN! Seriously why the fuck did Toho decide the Millennium era of the franchise shouldn’t have continuity between the films is beyond me. This is the fourth time in a row they’ve done this and it’s getting fucking annoying. Well AGAIN this entry ignores all the sequels that came before and AGAIN is a direct follow-up to the original 1954 version of “Godzilla” (sigh). So the plot spends some time setting up Godzilla AGAIN before introducing Japan’s mechanical defense against him with Mechagodzilla, a giant cybernetic creation built around the bones of the original Godzilla that died in the original film (seriously… why would they do that?). This is where the plot goes bat shit crazy as the bones have a genetic memory and soon Mechagodzilla goes on a rampage!

The plot elements of Godzilla’s bones having a genetic memory is absolutely hilarious and kept me laughing for some time. The look of the new Mechagodzilla is awe inspiring mixing the viciousness of the original 70s version with the sleekness of the 90s version to make a nice happy medium. The filmmakers however decide to make the film more ‘realistic’ by having Mechagodzilla constantly run out of power and by having it being flown around with aircraft as opposed by blasting off itself. The film is about a giant cybernetic organism with genetic memory bones fighting a giant mutant dinosaur… why the fuck do we need shit like this to be more ‘realistic’.

Overall this is a pleasing entry into the franchise with eye-catching special effects and a nice update for one of Godzilla’s nastiest villains. What keeps the film being as good as it’s predecessor “Giant Monsters All-Out Attack” is that it has to spends so much time re-setting up the return of Godzilla when they could have blew past that if these films actually had FUCKING CONTINUITY! Thankfully Toho decided to actually have continuity after this entry as the follow-up film with be a direct sequel. THANK GOD!

Written By Eric Reifschneider
Posted by Cronosmantas at 11:02 AM