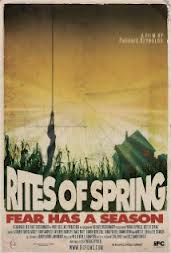 For the horror enthusiast, when you hear of a slasher film that takes a twist on the genre - you probably take notice. I certainly did and that's how "Rites Of Spring" jumped onto my viewing queue radar. A group of kidnappers that stumble onto a farm where a supernatural entity is slaughtering people? Sounds damn promising from that description! Too bad the film didn't quite live up the intensity that its premise promises as it sort of stumbles through two separate story lines and into a rather underdeveloped slasher finale.

When Ben (Bowen) and his friends decide to kidnap a rich business man's daughter for ransom to fix their economical problems, they decide to hideout in the country and wait for the money to arrive. What they fail to realize is that just a farm over, an old man (St. John) is determined to bring about another bountiful harvest by sacrificing two young women to a nasty creature...

What starts off as a typical slasher flick slowly divides into two different stories, one about the two girls at the farm house being prepped for the sacrifice to the monster man living in the fruit cellar and one about our wannabe bandits hiding out for their kidnapping. The idea of these two stories coming together into a big slasher throw down is certainly a cool one. They build up these intriguing characters for the ransom flick (not so much for the women and the old man in the slasher portion), but they simply take far too long getting them into the fire from the frying pan. Really, the two stories don't collide until the final act so we actually get very little of the idea that made "Rites Of Spring" so interesting.

While I enjoyed how director/writer Padraig Reyonds goes about the kidnapping, the actual supernatural slasher portions feel...blah. Our 'monster' who brings about the crops is far too vague in conception (I kind suspect it's a scarecrow like creature...but that's me just guessing) and sort of runs around with his big sharp stick like a horribly simple serial killer with no expansion on the 'supernatural' aspects. When a couple people bite the dust, I was relatively unconcerned with the entire ordeal too. Not what I necessarily want from a slasher.

There were aspects that I definitely enjoyed about "Rites Of Spring" as I thought the acting was pretty decent and the film started off with a strong sense of style and atmosphere. Yet, the film sort of tanks after the first act. The kills were mundane, the tension lost momentum as it dragged getting the players where they needed to be for the finale, and the slasher portion was rudimentary. Perhaps others will enjoy for its unique two story thread, but for me it was a disappointment.