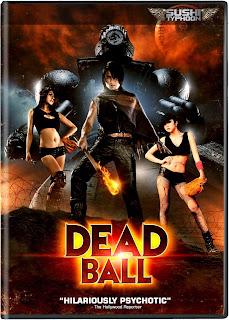 As my continued quest into splatter films continues, the ever vigilant Sushi Typhoon (through the awesome Well Go USA here in the US) brings out another odd flick with "Deadball" for my journey. Although the film is more comedy than it is splatter, "Deadball" delivered a few home runs on both sides of the field. In the end it was a rather mixed effort, either being extremely successful or off the mark with its gags, but for splatter fans or those looking for a silly film watching experience "Deadball" is at least hitting half of the pitches.

Jubeh ( Tak Sakaguchi) has sworn off of baseball since the untimely death of his father after he throws an explosive pitch to him. In fact, he's sworn to use his intense abilities to fight evil and take down ruthless villains. That's not what society seems him as though when he goes on a vicious killing spree. So he's arrested and sent to prison, a prison where the war-like warden is doing some questionable things. A place where he's offered a spot on the baseball team. A place where he can take down one more villain before he leaves this world....

What makes "Deadball" such a rather random and unique film is that it feels like two separate films. The first half is almost a spoof of prison films and the second half is a splatter film done on a baseball field. Unfortunately, the first half is significantly better than the other and the transition between the two halves can be a little choppy as the film loses a lot of steam heading into the first (and final) game of this baseball tournament.

The first half is uproariously funny though. After brief explanation about our protagonist's path of destruction leading him to our evil prison with its Nazi warden, the film kicks into full on Zucker spoof mode. I was handedly reminded of "The Naked Gun" films throughout this first half as our lead delivers some of the most ridiculous lines with a stone cold straight face and the visual gags fly around at lightning paces. The ridiculousness of the prison is actually topped by our lead (who simply owns the role) and he is given plenty of gags to work with - batting a baseball with a person, a fist fight with the warden that culminates in one of the greatest telephone gags known to man, and my personal favorite the random cigarettes he pulls from mid air. If the entire film had been this first half, "Deadball" would rank as one of the best comedies I've seen in ages.

Too bad the film deviates from this spoof comedy style and meanders down a splatter film path for the finale. Not that the last half isn't without its moments, including a pretty funny slapstick gag with legs of the vicious baseball robot at the end, but it just loses a lot of steam as it starts to throw in "twists" to the plot and starts moving into more splatter film techniques. The pacing tanks and the ending seems to be randomly tacked onto the film after the end of the baseball game. The CGI gore is rather unimpressive compared to the gore one expects from a splatter film and the climax leaves quite a bit to be desired.

All in all though, when "Deadball" was on the mark it was one of the funniest spoofs I've seen in years. When it was off the mark, it was a full on whiff - missing the pitch and completely stumbling through its final act. The film does get the benefit of some great gags and a great lead performance, but it still remains as a film mostly for splatter fans and those with a slapstick sense of humor.

You know you want to know what the telephone gag is...so you might as well just pro-order the film at the links below for its April 9th, 2013 release from Well Go USA!