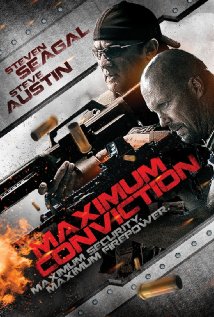 
Far be it for me to criticize the career of Steven Seagal as most action stars of the 80's and 90's have dwindled into straight to DVD purgatory, but it would seem that Seagal's career has been the most consistent of many of them (ironically). Unlike many of his peers he has focused on just delivering a series of pure silly action films instead of dabbling in dramatic or artistic films like many of his brethren. At times it is kind of refreshing, but on the other hand you get films like “Maximum Conviction” where the potential of the film is much greater than the actual execution.


Cross (Seagal) has been hired to help clean out a high security “off the map” detention center for dangerous criminals when the government decides to shut it down. To help with some of the inmates, he brings in an old pal Manning (Austin) and things seem to be going smoothly. That is until an unregistered group of federal agents show up asking about one of the newer female prisoners. Now its two teams of soldiers squaring off in an abandoned prison...and only one will come out alive.


For those who are Steven Seagal fans, the quality of “Maximum Conviction” is not anything surprising. When you add in that it co-stars ‘Stone Cold’ Steve Austin as Steven Seagal's partner in kicking ass, then the relative shittiness of this movie shouldn't surprise anyone. Knowing that when I started the film, I have to admit that I had a blast watching it. Yes, the movie is bad, but it is so bad that it's entertaining.


Unsurprisingly enough, the action in the film is the highlight. Even if Seagal's action abilities have subsided in recent years leaving, more often than not, awkward hand to hand combat sequences, the addition of Steve Austin for those kinds of fights elevates the film a bit higher than it should be - including a few fun one liners and some unintentionally funny action set pieces (including some logic reducing moments in a kitchen fight). Nonetheless the action is at least entertaining even if half of the time it stupefies with how ridiculous it is.


...which is more than I can say for the rest of the film. Both of these action stars couldn't act their way out of a paper bag and their brief time on screen together produces some of the most cringe-worthy dialogue and delivery I have seen in awhile. The film also loves to throw in "modern" transitions that make it look cheaper than it already is as computer generated maps and security camera footage just take one out of the moment instead of adding style points. Director Keoni Waxman tries to add some spice to the mix, but usually ends up making it seem more like a direct to video film than it might have otherwise. "Maximum Conviction" just runs through the motions as a cheap actioner despite attempts to make itself memorable with classic action plot twists and modern direction.


"Maximum Conviction" is the kind of film that appeals to only those people who are going to enjoy it for its crappy writing, uninspired direction, phoned in performances, and fun action set pieces. Outside of that small sect of individuals (which I include myself in), this film is a skip in my opinion.


BONUS PRAISE: A brief, but memorable appearance by up-and-comer Bren Foster is remarkably unique in this film. The man has a pretty strong screen presence and he has, perhaps, the best hand combat fight in the film - even if it’s his only one. Foster is someone to keep an eye one as it seems like if the cards are dealt right, we will be seeing much more of him.