Masters Of Horror: The Damned Thing - 2/5 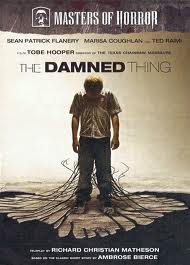 A middle aged cop in a small Texas town (Flanery) with his own marital problems and significant amount of paranoia begins to witness the townsfolk do strange things. Like killing themselves in massive rage. After what happened to his family years prior, he begins to suspect that something is controlling everyone...some damned thing that is out to get him.

Tobe Hooper's career has, let's just admit it, tanked in recent years. The films he has been doing aren't bad by any means, but they are rarely good which is the same plague that riddles "The Damned Thing". It's an intriguing idea about this force from beyond our own understanding (that's somewhat linked to nature as hinted by the plot) who holds a massive grudge against people, but the episode seems content at focusing down on some boring cliche characters instead of giving the proper plot treatment. The casting is solid enough (with a special treat of Ted Raimi as a priest), but its writing is hit or miss at building the characters while the 'invisible beast' is far more interesting. This of course is somewhat ruined by the ending of the episode and its awful special effects before it somewhat redeems itself with a final twist. "The Damned Thing" is just an odd mixture of good and bad that makes the whole thing mediocre overall. It's got moments, but seems so cliche at times that its hard not to be bored with it.

Written By Matt Reifschneider
Posted by DarkReif at 8:33 PM