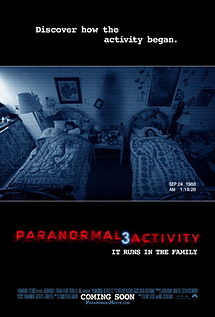 After the repetitive if not mildly clever "Paranormal Activity 2", my excitement for the franchise was decidedly lessened. The original one was expertly executed and the fan in me wanted to see that return while adding something new to the "mythology" of the series. "Paranormal Activity 3" does give the series a new life by adding in a few new twists and turns that will have fans perking their ears even if it is rather hit or miss with its scares and thrills by a style running thin.

In 1988, a young family with two cute daughters Katie (Csengery) and Kristie (Brown) move into a new house with high aspirations. The boyfriend of the mother Dennis (Smith) is a video wiz with his VHS tapes and works at home cutting videos together. When strange happenings at the house begin to stir his curiosity, Dennis begins to record everything he can to decipher if the daughters 'imaginary' friend Toby is only a figment of their imagination.

As the series moves in the backwards direction (this one is a prequel to the previous prequel sequel), one has to hope that it plays enough interesting connections to the previous entries to keep us occupied. We know how it ends...right? That's what makes "Paranormal Activity 3" such a solid watch. You're not really sure how it will end. We basically know, but the way that the film plays out with its low energy writing and long builds it makes us question what we do know about the franchise. This is a trick that makes the film work so well as we try to remember what happens to this characters from hints in the previous entries.

So its a step up in writing quality, which is one of the reasons the repetitiveness of "2" was so daunting. Unfortunately, it still feels very formulaic in its presentation. Although the 1980s kick of VHS should make for some different takes on the film, it follows the same guidelines. Yes, the hauntings might differ slightly (with a definite highlight being a scary "Bloody Mary" sequence in the bathroom), but overall its mostly shit flying around like same old same old and it lacks some of the surprise it should have had.

To be honest, the franchise is still a lot of fun to see what they come up with next to make it different without changing too much to piss off the fans. This one takes it a bit farther than the previous sequel and it works in some very cool moments (the missing kitchen is quite the sequence) even if it still runs very much by the numbers. It's a fun entry, but still far from the revival that some claimed it to be. Curious to see where "Paranormal Activity 4" goes now that we've hit the 1980s...can't go much farther back than that!

Written By Matt Reifschneider
Posted by DarkReif at 8:15 PM