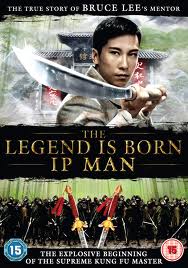 Although it has no affiliation to the other two massively successful Ip Man films (which to this day are some of our two most read reviews), this prequel of sorts goes back to the beginning of Ip Man and his life of martial arts training before he became the teacher he was. Hence why it is called The Legend is Born: Ip Man. It doesn't have quite the charm or quality of the other two unaffiliated Ip Man films, but it certainly does stand on its own nicely with solid fight sequences and a film with a bit of heart set to the time period.

Growing up in a school of Wing Chun with his adopted brother, Ip Man (Dennis To) has adhered to the teachings all his life. He still craved more. After studying in Hong Kong and learning a variation of the Wing Chun style from an outcast man, he returns home to find himself slightly at odds with everyone except for the woman whose heart he stole. When a mysterious Japanese investor shows up and things start to go south, Ip Man might be the only one with the smarts and the skills to stop it before it rolls out of control.

Although its hard to take any film that deems itself 'based on a true story', The Legend Is Born: Ip Man does play off the historical elements nicely into the martial arts plot formula. It's got a great aesthetic to the picture with some solid enough costume and art designs. This is held together by a strong lead performance from To as Ip Man whose subtlety is a nice contrast to that of the main supporters. Even the fight choreography is strong with lots of great hand to hand combat sequences (although sometimes the settings need a more dramatic effect to spice it up) that blend some realistic fighting and over the top moments.

The film does suffer from feeling like two separate films. The first half is certainly a film that sticks to the growth of Ip Man as a person and setting up his training sequences while the last half ends up throwing a ton of cheesy evil Japanese characters and an odd 'whodunnit' political murder mystery that fails to play out to its full potential. It's kind of an odd shift that pushes out of the blue in the last half. Yes, it does give us a 'proper' villain for our hero to go against, but it ends up rushed with its characters and doesn't fulfill what it could have.

As is, The Legend Is Born: Ip Man is still a strong modern martial arts film. It has a great lead who holds his own (he's no Donnie Yen, but he gets it done) with solid martial arts choreography and the underlying love story is well played as a subplot. It is flawed in its structure and attempts at making itself more 'epic'. Still The Legend Is Born is a solid film and worth the watch - especially for fans of the other Ip Man films.