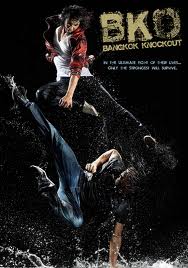 Thai filmmaking has come leaps and bounds in the last decade, but their action films (which are probably their best known genre thanks to Tony Jaa and director Pinkaew) continue to thrive in the B-grade status. Let's take a look at one of the latest ventures of Thai ass-kicking known as "BKO: Bangkok Knockout". Directed by the man that brought us classics like "Born To Fight" and "Ong Bak 2" and "3", "BKO" pushes the action to random extremes. With little to no story, poor characters, and some of the acting so bad it makes Tony Jaa look like Academy Award material this film flounders outside of its stuntwork. Won't lie though...still had a blast watching some of the fight sequences.

A group of various friends/fighters win a competition to head to Hollywood as a fight squad. After their massive celebration though, the entire group wakes up in an abandoned complex with a few members missing. It would seem they are trapped in a massive game where international betters look to make money as the kids fight their way out.

Combining elements of "Mean Guns" and a massive tournament style fighting film like "Enter The Dragon", "BKO" is not even as close to being as good as either. The plot is about as thin as the paper characters that litter its half assed settings. It's silly most of the time and when its not silly its completely ill developed with poor romantic subplots, betrayals, and bottom of the barrel acting. The over the top villains, lame heroics, and poor team chemistry plague this film from minute one with B-grade action film cliches and certainly sink this film to the bottom of the sea of bad films.

Who are we kidding though? Who the hell is going to watch a film like this for its character developments, smart plot moves, and great writing? Not this guy. I'm fucking watching it for its sick stunts and kick ass fighting. Of which "BKO" displays in nonstop fashion for about two-thirds of its play time. If it sounds ridiculous and random - its probably in this film. Let's hit the list: motorcycle fights, armored cars driving through walls, relentless head kicks, cage matches, every style of modern martial arts known, multiple crotch kicks, leaping wall climbing, fights on semis, pipe fights, gun matches, and to top it all off - a flaming iron masked villain wielding an ax. I shit you not, "BKO" has a quantity of stunts that would make an action fan's jaw drop.

"BKO: Bangkok Knockout" is not a good movie. It's story is awkward, the acting more so, and characters that no one would really care for. It is also so bad, that its awesome. This includes the extreme amounts of ass kicking that are included in its hour and a half play time. Bad action movie fans may enjoy it for its unintentional hilarity, but more respecting foreign film fanatics need not apply. That being said, I enjoyed the hell out of this movie.