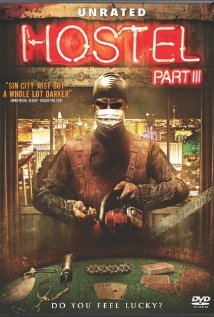 Firstly, since I have no reviews up for the previous two, let it be known that even though the "Hostel" films have their charms I still think they are overrated. Didn't stop me from submitting myself to the direct to DVD third entry. A third entry without Eli Roth at the helm and a story that's a horror version of "That Hangover". Yeah, this one was a real good time, let me tell you.

Scott (Hallisay) is going to be taken out for his bachelor's party by best friend Carter (Pardue) to Vegas for a good time. He objects, but peer pressure obviously wins out even for adults. They head out to have a good time, but when one of the other friends goes missing the next morning they set out to find him. Only to find that the secret society "Elite Hunters" has established a group in Vegas...and bets are due.

Unfortunately, most of the problems that arise in "Hostel: Part III" are due to budget constraints and a script with poor execution. The film has a decidedly cheesy look to it and a script that heavily borrows from "The Hangover" in structure. It lacks a cohesive nature to it as it seemingly meanders through the motions to get to the one true twist in the film that seemingly works for about two seconds before dive bombing into ridiculousness again. Spiegel tries to work some magic with how he goes about things (the intro is a nice little homage to the first two in style), but in the end its simply watered down.

And speaking of being watered down, the essence of the original "Hostel" films were that they were modern Grindhouse flicks - with gratuitous nudity, gore, and asshole characters. This film only has asshole characters. It tries to sell off some of the gore and nudity by going halfway there (shots that only show glimpses of the silly torture sequences and plenty of hinted at nudity), but it simply feels like it halfasses the grindhouse effect of the previous films. Something that will be certain to piss off fans of the franchise. The worst torture this film can conjure is watching it.

"Hostel: Part III" is nothing more than a cash-in on a franchise that became a hit when it was probably better off in the underground. It has a few moments, the opening sequence for example, but it's ruined by poor character development, poor kills, and an ending that's incredibly cheesy and idiotic. A sequel that earns its direct to DVD merits of not even coming close to the first two in quality.