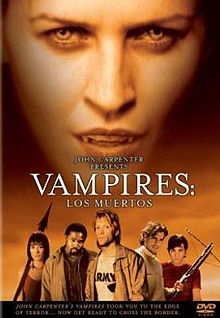 "Vampires" might have won its way into my heart with extensive violence and charm, its way ward sequel won its way into my ire with a cheap look, horrid cast, and a bare bones story. When its only redeeming qualities are that it is produced by John Carpenter and it stars Jon Bon Jovi (who will be referred to as Jon Jon The Bon Bon from this point on because I feel like it) then you know that you are getting the real deal when it comes to vampire franchises.

Derek Bliss (Jon Jon The Bon Bon) is a freelance vampire hunter in the southwest and his life has, to this point, been fairly lucrative. Now an unknown buyer wants him to put together a team of slayers to hunt down a rogue pack of vampires who are making their way across Mexico with unknown intent. With a trail of bodies left in the master's wake, Derek will have to rely on a rag tag group to help him stop the vampires before they uncover a secret that hasn't been revealed in like...four years...or something.

The connections to the first "Vampires" are loose including an awesome cop out scene where the priest from the first one ends up being dead in a graveyard and the general same plot of a monstrous vampire looking for the fabled Black Cross so that vampires can walk in the day. These loose connections do let the film do its own thing (which it really doesn't) while still making franchise fans happy they could continue on the story (which it doesn't) as it heads on a path of similar style. Unfortunately, the writing for "Los Muertos" is about as incompetent as can be. The plot is formulaic and forgettable, the characters cliche and often silly in their motivations, and the dialogue atrocious. With foundations like this to build on, you know you're in for a rocky film ride.

It doesn't get better from there. Wallace tries his best to work the severely low budget (are those sets?), but the made for TV special effects and the horrendously acted cast don't do it any favors. Didn't know that Jon Jon The Bon Bon was an actor? He still isn't. It must have been in his contract though to have people worse than he is to be in the supporting roles to make him look better. Our half-vamp female hero is simply awful to watch and she makes the underused and boring villain look like she's running acting circles around her. It's laughable more often than not.

Here's the low down: if you liked "Vampires" and have an itching to see what else that universe has to offer than catch "Los Muertos" on cable. Don't bother paying for it unless you are a glutton for the franchise like we are. It's not worth the "bite" on the wallet.