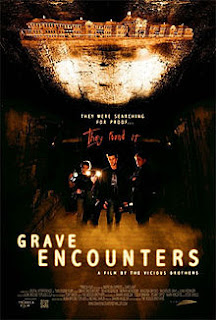 After seeing a bootleg trailer for "Grave Encounters" months ago, my interest in the film was perked. Looking like a cross between "The Blair Witch Project" and "Paranormal Activity", the Canadian/American found footage film seemed to invoke some great scare moments to match its creepy atmosphere. To say that the actual film was quite a bit less intriguing than the trailer is an understatement. It is, in fact, a fairly close combination of the above two mentioned films, but it rarely invokes the realism of the former or the creepiness of the latter - leaving a film that sort of dabbles in mediocrity despite some interesting ideas.

Grave Encounters is a reality TV program dedicated to investigating the paranormal hotspots in the world. Host/director Lance Preston (Rogerson) is skeptical of the entire thing, but knows its going to make him a shit load of money. That is until they film episode six. Locking themselves into a massive abandoned insane asylum for the night, the crew of Grave Encounters is out to find proof of the reported hauntings - only to discover that the ill intents of past residents have other things in mind for them.

The "House On Haunted Hill" premise might not be original nor its found "real" footage style, but "Grave Encounters" does invoke some interesting aspects that make it worth the rental at least. The first act of the film is an obvious knock on the "Ghost Hunters" reality series that has been so popular and in many ways this skeptical look at a 'behind the scenes' of the scare tactics these shows use is pretty funny. Witnesses are paid off and locations picked for eerie atmosphere rather than legit reports. Of course, when the film goes into full on scare mode it can be hit or miss.

The latter half of the film does play up some clever ideas. The way that the building seems to shift its hallways (including a very cool scene where they try to bust down the front door) and the weird lapses of time make for some creepy tense moments, but the obviously J-Horror knock off ghost designs lack the necessary smarts to match the idea for the film. It really tries to build tension with character disagreements and odd plot progressions (many of which are ill explained and lack the logic to not delve into cheese mode - like the asylum patient wrist bands for example), but a lot of it is forced and ineffective.

Fans of the previously mentioned films will find elements to like about "Grave Encounters", but the hype surrounding the film once again creates a void for the viewer. It has some great moments, but the film itself is only mediocre.