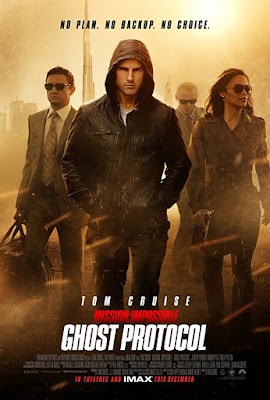 With the high quality of spy games and action that "Mission: Impossible III" brought to the table, this fourth entry into the series (subtitled "Ghost Protocol" if you didn't already know that) came with some high expectations. Some expectations that were met and others that were not. "Ghost Protocol" is a visual feast though with some stunningly effective action set pieces, even if its missing some essential "Mission: Impossible" elements that would have kicked it up to the level that part III achieved.

Ethan Hunt (Cruise) has to be busted out of a Russian prison by a field team (Pegg and Patton) when a botched mission loses some nuclear codes into the hands of an end-of-the-world visionary codenamed Cobalt (Nyqvist). This is over sighted when the same madman bombs the Kremlin and IMF is blamed. The President invokes ghost protocol and the entire team is disavowed. Now its a race against time for Hunt and his team to stop a nuclear war from breaking out without the back up they could always depend on...

It's hard not to compare this fourth entry with the low point of the franchise that was "Mission: Impossible II". Brad Bird (in his live action film debut as director) ably layers on the style playing the visuals of the film and action setpieces to their maximum effect. He pummels the audience with enough mission tension and visual scariness (damn that glass climb in Dubai had me dizzy in the theater) to get the point across and his use of visual effects is obviously top notch. This is partnered with some great chemistry between our heroes as Cruise continues to own the lead role and newcomers Pegg and Renner steal many of the scenes they are in with quirky humor and well placed banter. In this sense with all of the intense action sequences, "Ghost Protocol" is a riot to watch and works some serious magic.

On the down side as with "M:I II", the plot is so ridiculous that often enough it feels like an Amercianized James Bond film. Nuclear secrets stolen and a looming nuclear holocaust between the US and Russia? Assassins paid in diamonds? Even the action set pieces are a bit out there with the Dubai climb and an extensive level leaping finale in an electronic car garage. At times it's almost too ridiculous to be believed even if its fun to watch. Suspend your disbelief again.

My other issue with this latest "Mission" is the lacking presence of a villain. When I learned that Nyqvist was set to be the villain of the film - I was stoked. Great foreign actor that could own the role. Turns out he is rarely in it and the film focuses more that "time" is the true culprit of the film rather than Cobalt - which is really disappointing to me.

All in all though, "Mission: Impossible - Ghost Protocol" is still a great action film. It's got (almost) all of the necessary elements plugged in with some heart stopping stunts and great actor chemistry. It's not quite to the effective blend that the third film nailed, but I had a blast watching it anyway.

Written By Matt Reifschneider
Posted by DarkReif at 1:05 AM