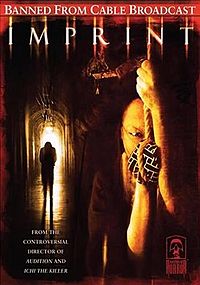 Directed by Takashi Miike (known for a lot of cult shit, but specifically "Audition", "Ichi The Killer", and "One Missed Call".)

A wandering journalist (Drago) stumbles upon an island of courtesans in Japan while looking for the woman he swore to save and bring back to America. There he meets a disfigured prostitute who claims to know what happened to his lost love. The story she tells beginning with her own life is one of horror and betrayal...but how much of what she speaks of is the truth? What would she hide?

"Imprint" is one fucked up episode. It's fully understandable why it wasn't aired with the rest of the series. "Imprint" goes all out to shock and disgust with its tales of macabre, but at the hand of the brilliant director Miike - its a visual feast whose artistic value makes up for some of its intense shock factors. It's a odd bird as an episode as it jumps time periods and settings rapidly (even though it makes sense with the tell tale structure of the film) and invokes the oddities of an island of courtesans with some hit or miss performances that seem over the top, I'm looking at you Drago, but its strange ability to blend extreme moments of violence and terror with subtle dialogue shifts and atmosphere is makes its flaws seem like afterthoughts of misunderstanding. It's not an episode for the faint of heart as the torture sequence makes "Audition" look tame and its themes very controversial, but once one gets past all of that - the art of filmmaking shines through.


Written By Matt Reifschneider
Posted by DarkReif at 12:19 PM