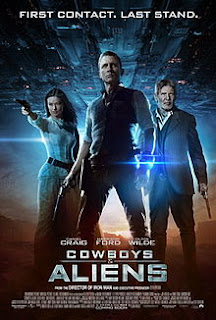 Even though people consistently told me that I would dislike "Cowboys & Aliens", I wrote them off. I'll have low expectations going in. It's got some great talent. It will have its moments that will make one look over the faults. Whatever excuse one could think of came up to justify its existence. Unfortunately, no matter what excuses one can manifest to fight for this genre mix-up film the problem remains that it just doesn't work. Ironically, nothing in the film seems to work to its potential. When you have a big budget action film of this caliber miss target...its certain to be one hell of a miss.

Jake (Craig) must have had one crappy day. He wakes up in the middle of the desert beaten, bloody, and wearing a fancy metal bracelet with no memories of who he is, how he got there, or where he is going. After meandering his way into a small town, Jake discovers he's quite the outlaw and a cattle man with a vendetta (Ford) is ready to give him hell...that is until some alien spaceships decide to shake things up. Now these two hardened loners will have to join sides (along with bandits and some Native Americans) to retrieve some missing kin and give these rustling aliens a one-two punch they'll never forget.

The biggest problem that "Cowboys & Aliens" faces is its 'too many cooks in the kitchen' talent pool involved. A great cast, a surprisingly solid director in Favreau, a massive budget, and a concept that really hasn't been looked at since the underground film "Oblivion" all make this film a potential cult classic in the making. It all seems to...become an abrasive nature for the film. It loses focus on trying to get all the cliche things in and not enough on just letting it be what it is. A massive B-grade action film.

Despite an early start that plays up western motifs and gives Craig an odd modern Yule Brenner feel, the film decidedly tanks from there. It tries to throw in too many characters we're supposed to like (giving Craig some awful "aw shucks, that's charming" moments that goes against what we are initially fed) that the great cast can't save and then follows a mainstream formula while trying to hide it in massive special effects that are decent, but nothing we haven't seen before. It's as if the whole thing is watered down for mass consumption to the point where it doesn't feel filling at all.

Of course the film has its moments, its introduction to the character Jake is fun and gives a great anti-hero vibe and the action set pieces (while still very much run of the mill) are fun when not illogical in there placement.

"Cowboys & Aliens" suffers from an unfulfilled potential that crafts a sub-par action film who haphazardly throws about western and science fiction details. Perhaps fun to take it for what it is, but beyond that the film just meanders like the many western anti-heroes it tries to recreate - never finding its direction before dying a slow death from creative starvation.

Written By Matt Reifschneider
Posted by DarkReif at 10:52 PM