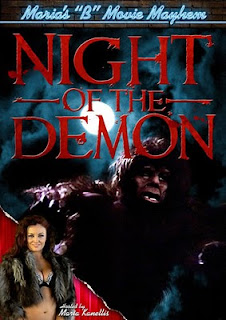 The film opens with a man badly burnt in the hospital telling authorities about the horror he went through that he barely survived. This predictably sets up the rest of the film in flashback mode and if you hate flashbacks then you are going to find yourself hitting your head a lot as there are even flashbacks within flashbacks. It seems that he almost died after taking a group of students into some remote woods to look for bigfoot, who has been tied to multiple brutal murders in the area. As you can guess... they find the thing!

The title sequence sets the film up perfectly with our bigfoot tearing off a fisherman's arm and his bloody stump bleeding out and filling one of the monsters footprints. This lets the viewers know this isn't going to be your average Sasquatch film along the lines of "The Legend of Boggy Creek" and "Creature From Black Lake." This is the 1980s and our filmmakers knew bloody slashers were making money at the box office so they wisely decide to gore the film up making bigfoot a backwoods slasher killing people in such awe dropping bloody ways that they would even impress the likes of Jason Vorheese. I'm talking about limb rippage, axes to heads, pitchforks through torsos and impaling sleeping campers by throwing their sleeping bags onto sharp sticks (reminiscent of John Frankenheimer's "Prophecy"). The killing that takes the cake however and the one that made this a cult favorite is a kill in which our bigfoot rips off the dick of a biker taking a leak on the side of the road. Seriously, I can't make this shit up!

The gory killings are a lot of fun but sadly the rest of the "plot" is novice at best. Lots of bad acting, lots of mundane narration, lots of people talking in lumberjack shirts and lots of disjointed flashbacks. Thankfully the gory killings are spread throughout the film to keep the viewers interested. The picture does rear its ugly head into disturbing territory when we learn about a young girl who lives out in the middle of the woods with her bible thumping father that gets raped by our hairy fiend and actually gives birth to a bloody human/bigfoot hybrid!

"Night of the Demon" is Z-grade horror entertainment but at least it ENTERTAINS unlike many Z-grade horror films. Despite the disjointed flashblack plot flow and bad acting, the ultra violence and gore is enough to keep any fan of early 80s slashers and/or bigfoot horror films entertained. For that element alone this obscure, bizarre and mistitled bigfoot slasher is well worth hunting down and Code Red released a wonderful edition transferred from original 1" tape masters as the original prints and negatives have been lost.

Written By Eric Reifschneider
Posted by Cronosmantas at 3:34 PM