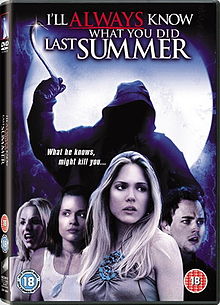 The long awaited trilogy is now complete. Hold on. It wasn't long awaited and it hardly completed shit! So what the hell is "I'll Always Know What You Did Last Summer" even doing here? That's honestly a great question that I have trouble answering even after watching the film. Seemingly a 'transition' film to kick the series off in a 'new' direction, "Always" hardly does so as it completely rehashes the original plot line from the first film and does as about a shitty of a job as possible doing so. A few new things are thrown in here and there, but really its a complete suck job of being a slasher with its modern tendencies and lacking slasher elements. A very disappointing entry that lacks in every element.

Amber (Nevin) and her friends in a small town of Colorado have the greatest prank ever. They fake the return of the fisherman killer at the July 4th carnival only to have the dumbass stunt go horribly wrong and kill one of their friends. So they vow to cover it up and never tell anyone. A move that brings out the "real" fisherman killer a year later to stalk them and viciously take them out one by one. Can Amber figure out who the killer is or could it possibly be the resurrected Ben Willis of lore from two previous crappy slasher entries?

Yawn. Same old story as the first film except this time it makes even less sense. This almost deserves a standing ovation itself considering how little sense the first two films made. A fisherman in Colorado? Not like rain slickers and giant fishing hooks are all too common here. The connections to the first two films are weak at best (look its a scrapbook they made!) and its "who done it" plot progressions are about as by-the-numbers as possible. That is until the finale when they add in the only real new twist into the franchise which makes about as little sense as possible, but does open up the possibility to franchise the hell out of the villain. At least they tried to add something new at all...

Well if the story blows, let's hope it kicks ass at being a slasher. Yawn. I'm going to go with a 'no' on this part too. Our idiotic teens rarely spark chemistry or fun in their run of the mill stereotypes while the acting actually gets worse than Jennifer Love Hewitt. The red herrings and side characters are silly and obviously red herrings. While the kills are basic and give us nothing to hoot and holler over with little gore or cleverness. Not a single gratuitous element to be found here in this slasher sans stupidity.

This is all rolled into one hair-pullingly silly modern directing style. Crappy quick edits plague the actual kill scenes or tension of the film while the the awkward flashes of white and sepia tones of the film make it feel like a crap home made movie. A warning to upcoming filmmakers: quick edits, flashes of white, and random shots fast moving images do not replicate tension and excitement. It just makes your audience ADD.

Even if you enjoyed the first two, skip "Always". It's completely redundant, a horrible film at being a slasher, and when it does throw in something worth its weight in film as a twist - it comes off as a cop out to keep the franchise cooking. Not a whole lot worst paying to see here. Sorry modern slash junkies.