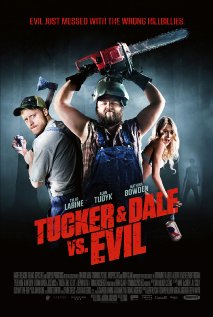 Horror comedies are either really awesome or extensively crappy. Not a whole lot of middle ground included in this genre. Which is why my hesitation towards "Tucker & Dale Vs Evil" made its payoff even better than expected. An ironic take on the slasher genre, "Tucker & Dale" understands why slashers work, pokes fun at it, turns it on its head, and then runs like its own fire. A system that works with relative effectiveness to get the fun and comedy to blend with the gore and kills.

Tucker (Tudyk) and Dale (Labine) are two hillbilly best friends out to go fishing on their newly bought woodland property and shack. The random college students who are out to go camping down the lake shore from the vacation shack don't seem to trust them. In fact, these hyperactive college kids take them for serial killers when the two hillbillies rescue their friend (Bowden) from drowning. Now the kids are out to stop the inept hillbillies before they all get killed...

The twist that makes "Tucker & Dale" worth its weight really does carry throughout the film. Our cliche serial killer hillbillies are the heroes in a case of mistaken identity while our normally heroic teen heroes end up being the villains. Normally this kind of gimmick would invoke some serious eye rolling and scoffing, but the writing and performances contained in this horror/comedy sell it so insanely well that it never feels like the gimmick it really is.

The writing understands all of the hillbilly serial killer slasher elements and throws them into the film as well. So not only do we get the silly jokes about hillbilly best friends and ridiculously asinine college kids, but it gives us the horror elements needed for a slasher. Gratuitous gore, ridiculous kills, and an over the top villain. It does it in spades. We even get a cop with a board and nail jammed through his skull who walks for twenty yards (to an amazing quote about how he might walk it off) before dying. The film simply does it well.

Although the villain isn't quite as clever as it could have been considering how upfront it was on how it would be (when he gets half fried though - that's classic), "Tucker & Dale" stick to the slasher formula while using its clever writing and strong leads to sell the gimmick. It really does work too. It's fun with the kills and gore and fans of horror will get the jokes more so than those who aren't slasher fans. That's why it get's a solid Blood Brothers approval!