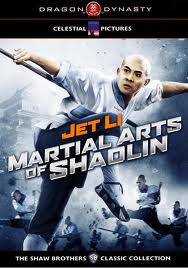 First things first, I have yet to actually watch the first two films in this franchise. Hell, I didn't know this was the third one until about 20 minutes into the film when I decided to research the film a bit after sitting in massive confusion. Didn't matter though, as "Martial Arts Of Shaolin" does a decent enough job at crafting its own film that rarely requires the need of research to enjoy it for what it is. Beyond that the film wavers in quality losing its focus too often for the sake of comedy or visuals to properly give its tale of love and revenge the needed punch it desperately wanted to have.

Zhi Ming (Jet Li) has studied and trained very hard at this school of shaolin. Raised there as an orphan, he learns that the man responsible for his parent's death has returned to rule over the land. Now he must team up with two other shaolin students from a different school (Wong Chau-yin, Hu Jianqiang) and find a way to escape from his school to take vengeance on this evil tyrant.

"Martial Arts Of Shaolin" is a Shaw Brothers film to its bones. Story about brotherhood, shaolin schools, and revenge? Yeah its not anything all that new. Directed by Kar Lau-Leung it also has a tendency to blow out the martial arts sequences to the max which is, of course, the highlight of the film even if this is far from his best work. Plot wise, it can be a very awkward film as it forces some of its plot progressions and throws in some strange humor. I swore I would never see Jet Li in drag again after "Fong Sai-Yuk" but here I am...watching him throw a temper-tantrum  in dress about sheep. Yipes. It does recover a bit in the last half of the film as we finally seem to get a direction for the film to get going, but by then its a bit of a lost cause.

The film does succeed with some of its action sequences though. As I mentioned prior, its definitely not Kar Lau Leung's best effort (the assassination attempt drags on way too long with the dance sequence) but the finale on the boat is wicked fun to watch with small boats and massive sword fighting. It's also very cool to see the young Jet Li do his thing (he has some wicked cool stunts in it) and for that "Martial Arts Of Shaolin" is worth the watch.

It's not near one of the best Shaw Brothers, Kar Lau Leung, or Jet Li films out there, but its place as the only film to combine all three makes it a kung fu fanatic must see.  It's got a couple of great fight sequences and some fun chemistry on screen, but beyond that its just simply mediocre.