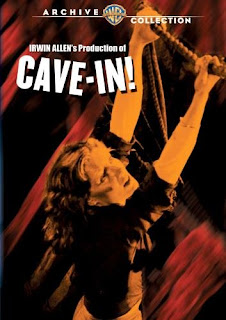 Producer Irwin Allan gave the disaster film genre the blue-print it needed with his big budget, all star releases "The Poseidon Adventure" and "The Towering Inferno" in the early 70s. By the late 70s, Allen was still riding the disaster film craze that he helped create long after it puttered out by regurgitating the same ideas for television films with low budgets and second rate casts. Films like "Flood!" and "Fire!" were minor television successes with "Cave In!" being the third of the three that is the most forgotten as it was made in 1979 but not aired until 1983. This my friend, is NEVER a good sign.

The title says it all as a cave in traps a group of tourists and guides get trapped in a cave after a few collapses. In order to get out they have to predictably beat numerous obstacles including a madman with a pistol hell bent on getting out.

"Cave In!" is as predictable as television disaster films come. Cookie cutter characters, including a down-and-out cop (Leslie Nielsen), an overbearing father (Ray Milland in a tamer version of the sadistic character he portrayed in "The Attic") and two old flames who cross paths again. All these characters are given back story with dreadful flashback sequences complete with the film going out of focus before and after they kick in.

The overall look of the film is nothing better than a television episode at the time and the cave obstacles look no more dangerous than cheap funhouse gags. Rickety bridges, swimming under rock walls, and other dull threats.

This is strictly cheap, dull television material here with boring characters and predictable plot points. Everything you've seen in other disaster films is thrown in with only the stereotypical pregnant women missing from the mix. It's not surprising the televised release of this was postponed and it never got a VHS release. I picked this up used as part of Warner Brothers made-on-demand DVD-R program and it's hard to believe people would actually pay $20+ brand new for such a forgettable, blah film. Only for the most hardcore disaster film collectors.