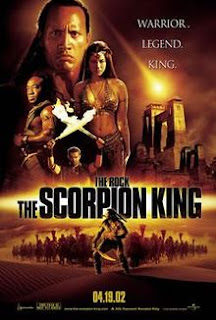 I might be the black sheep on this one, but "The Scorpion King" is a fucking riot. Of course the film isn't all that great, its plot is often silly, the humor is cheesy, and its main attraction of acting is The Rock. That doesn't stop it from completely embracing the tongue-in-cheek formula and piling on the action sequences which benefits the film in loads. "The Scorpion King" is a film where either you get it or you don't. Luckily, this reviewer gets it and eats it all up.

Mathayus (The Rock/Dwayne Johnson) is one of the last of his Akkadian brethren. His assassin clan has all been wiped out by the vicious King Memnon (Brand). When he and two of his kin are hired to assassinate Memnon's sorcerer (Hu) and the attempt goes drastically wrong, Mathayus finds himself alone with only vengeance against the skilled warrior king to fulfill.

Although "The Mummy Returns" was definitely a let down of massive proportions, it did intrigue with its villain. Thusly, this spin-off series was born turning our poorly constructed CGI villain into a heroic protagonist. Although the film rarely answers questions left by "The Mummy Returns" it does spur a great sword/sorcery flick not unlike that of a new "Conan". With its muscle built hero, large sword ridden battles, and an epic plot to overthrow a tyrant king this film plays the entertainment levels to it's heights. It has a charming and cheesy hero that we root for despite being an ass, it has massive action sequences of ridiculous nature (a sandstorm assassination battle, gun powder explosions, a damn catapult escape sequence, and a flaming sword fight), and it has a slew of cheesy lines. What B-action film fan isn't going to love this?

On the down side, some of the humor is completely amiss (particularly when it comes to cheesy sidekick character of the horse thief) and many of the plot progressions seem very by-the-numbers. It's a predictable story and rarely does anything to venture from the path that's laid out from the first ten minutes. This leaves little room for any true artistic room to wiggle for the film (sans the stylish modern action directing) and gives the secondary characters little time to get the depth they needed.

Although its cheesy and often times predictable, its hard not to be charmed by the wiles of The Rock and "The Scorpion King"'s entertain first kick ass second attitude. Yeah, the film is not going to blow you away with artistic ventures or surprise acting, we know that. Take it for what it is, a modern sword and sorcery flick, and run with it. Enjoy it for what it is.