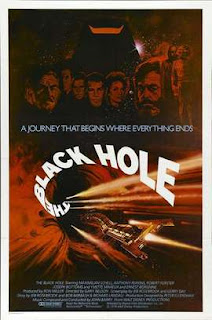 After the world domination of "Star Wars" every production company was jumping on the 'space race' bandwagon. Hell even super spy James Bond went to outer space! It was only a matter of time before Disney attempted a special effects laden space epic and in 1979 their bandwagon effort arrived in the form of "The Black Hole", a mixed effort from the company that appeals to the science fiction nut in me with its dark, moody approach but at the same time much of the plot ends up being just as big of an enigma as the astronomical theory that provides the title of the film.

The plot is essentially "20,000 Leagues Under the Sea" in space with a large dose of "Star Wars" and a sprinkle of "2001: A Space Odyssey". We have a research vessel discover a large survey ship that's been missing for over twenty years dangerously close to a large black hole (which is a large compressed mass that occurs after a dead star collapses). They board to find that a creepy scientist, teetering on the edge of genius and madman, and his army of robot drones (similar to Storm Troopers) have plans to ram his ship deep into the black hole.

The biggest draw of "The Black Hole" is the tremendous practical special effects. They are jaw-dropping and bring back lots of nostalgia from my childhood. The matte paintings, model and visual effects are just stunning and thankfully since George Lucas had nothing to do with this space opera we are safe from the filmmakers ever going back and adding crummy CGI into the mix. My personal favorite effect is a meteor that crashes into the ship and chases our escaping heroes down a corridor. It's like the bolder scene from "Raiders of the Lost Ark" just on a much larger scale!

Sadly the effects are somewhat belied thanks to some sub-par scripting. All of our characters are rather stiff and our mad scientist is nothing more than carbon copy of Captain Nemo. This is also a shame as the film boasts a great cast, if atypical for a Disney production (Anthony "Norman Bates" Perkins in a film produced in the great place on Earth... who woulda thunk it?). Even with this great cast they are all easily forgotten thanks to the bland writing and characterizations. The "2001" inspired abstract ending is a visual feast, but it doesn't make any sense and I doubt even the filmmakers can make heads-or-tails of it either.

In an attempt to have cutesy robot chanters ala R2-D2 and C3PO, our filmmakers include two silly robots voiced by Roddy McDowell and Slim Pickens who provide some minor laughs. It's not their characters, it's their appearance that annoys me as they are too damn kiddy looking with their big eyes to be in such a dark and depressive science fiction film.

I avoided "The Black Hole" for many years as it was produced by Disney, a synonym for my cult film loving mind as "wholesome family fun - stay away!". Other than the cutesy appearance of the robots, "The Black Hole" doesn't feel like a Disney film at all with its dark, brooding atmosphere. This rather non-Disney approach to the subject matter is actually what I like about the film and this approach no doubt aided to the film's disappointing numbers at the box office. Overall I liked "The Black Hole": the amazing special effects, the moody atmosphere and the epic crestfallen score by John Barry really appealed to me. Perhaps with tighter writing and more interesting characters I would have LOVED it instead of settling for LIKING it.

Written By Eric Reifschneider
Posted by Cronosmantas at 11:23 AM