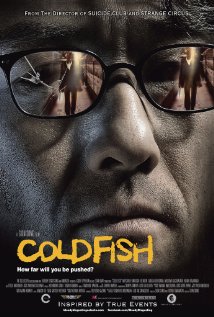 Coming off with some fairly consistent critical claim and getting a fairly good release through Bloody Disgusting Selects, "Cold Fish" worked its way to the top of my queue with its quirky plot and friend recommendations. Although I'm not quite on board praising it as one of the best horror films released last year in the US, the film did impress with its often disturbing premise that blends arthouse drama with cult like horror.

A father and his family, including his daughter from a previous marriage and his new wife, have come upon troubled times. His new marriage is rocky as he runs his small tropical fish store and his daughter hates him in continuous rebellions. When they meet another exotic fish shop owner who offers the father to become a partner and takes the wayward daughter as one of his main store workers, things are starting to look up. Yet this new "business" partner seems a little aggressive and our familial man will have to make a few decisions on what's best for his family...and their lives.

Director Sion Sono knows how to push boundaries. He has been a relevant artistic force in Japan for years with both his poetry and his films. This is what makes "Cold Fish" a mixed bag when it comes to pushing boundaries. The interesting blend of dark dramatic tension, character presence, and intense moments of horror is done with an artist's finesse who finely paints this portrait of failed societal roles and bastardized ideologies of freedom. Unfortunately, throughout its overly long run time the comparisons to "Audition" and its similar themes ran rampant and "Cold Fish" with its almost cartoonish extremes didn't quite grab the way it tried to.

Despite my disappointment towards the general feeling and concept of the film, it is expertly put together. The stunningly good cast (including an above and beyond creepy/intense performance from the antagonist to rival the subtlety of the protagonist) holds their own as the warped tale wraps around artistic licenses signed off by Sion Sono. The bold color choices, the intriguing dialogue, and the performances own this film. Each scene is a fantastic watch even if the overall film seems to be oddly choppy, cartoonish, and over long.

"Cold Fish" impresses with its high quality of execution, but the constant comparisons in themes and style to the superior "Audition" ruins the overall film. It's massively depressing as it beats you in the face with its horrible situations and hopeless drowning moments for the characters and in this way its a success. Just not as much of a success as hoped.

Written By Matt Reifschneider
Posted by DarkReif at 4:00 PM