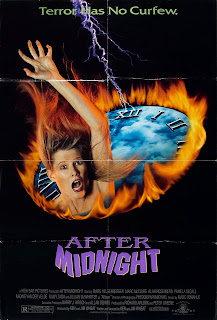 "After Midnight" was one of many horror anthologies that were regurgitated out of the mouth of horror in the 80's and out of this storm of anthology films "After Midnight" seems to be relatively unknown.. and for good reason. I'm not sure why but it seems most anthologies released in the 80's fail to be good. Don't get me wrong as I am not against horror anthology films. The first wave in the 70's (mostly by Amicus studios) were great. "Tales from the Crypt", "Asylum", and "The House that Dripped Blood" are all classics. The second wave in the 80's started strong with "Creepshow", a great film, and like any popular film it "inspired" many films to take it's mold that never came close to measuring up to it's own greatness.

"After Midnight" actually starts off interesting, opening with a group of students going to a class about the "psychology of fear". The best part is the teacher is bat shit crazy, I am not kidding! He takes out a gun, threatens a student with it, then puts the gun in his own mouth and pulls the trigger! After blood spurts on the wall he reveals to the class it was just a stunt to prove his point about fear. This scene would never be filmed today! My jaw hit the floor and for a split moment I thought I was in for a unseen classic. Sadly after the opening the film's wheels come off as the students are required to go to his home (as he is no longer allowed to teach on campus...hmmm...I wonder why) and they all share scary stories.

The first story is a throw-away one in which a couple's car breaks down and they end up breaking into a haunted house for help. The second story tries to generate fear but fails when a group of teens car breaks down in a bad part of town and a killer pack of dogs. The third is when the film picks up as a killer stalks a phone receptionist (Marg Helgenberger in an early role). This story actually almost made the film worth-while.

One thing that annoys me is that each story ends on an abrupt note. It works in the third story but fails in the first two. The film also fails to generate any suspense or scares, that is until third story which I highly recommend. Hell I recommend people to fast forward to it after the kick-ass psychotic teacher opening to this story and say hell with the rest. Overall I have to say give this anthology a pass and go rediscover the classic Amicus anthologies instead...