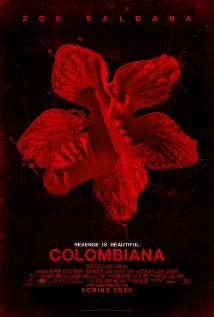 Luc Besson is an essential part of a balanced action film fan's meal. I might even go as far to say he's at the bottom of the of the proverbial action food pyramid. This, partnered with a script co-written by long time partner in kick ass Kamen, are the main reasons why "Colombiana" was a must see on my watching queue. This is also the reason why "Colombiana" was a complete and utter let down. The film is unoriginal and despite numerous attempts at crafting an artful and emotional side to the tale of an assassin with a grudge, its boring and leaves no impact. Not something I expect from the folks that gave us "La Femme Nikita" and "Taken".

Cataleya (Saldana) watched her parents brutally murdered in front of her by Don Luis (Benites) and his villainous right hand man Marco (Molla). With the help of her uncle (Curtis), she trains her entire life to become one of the best assassins in the world...with only one goal in mind. Finding Don Luis and bringing him the grave she escaped so many years ago.

Coming out as a combination of the previously mentioned "La Femme Nikita" and the ridiculousness of "The Transporter" series, "Colombiana" has a ton of potential. It starts off that way too. It builds this great action story about a young assassin looking to take down some drug lords by leaving a marker on her hits to get his attention to make him come out. Sounds fucking awesome! There are a couple problems here though and the potential seems to slowly circle the drain of the film until the finale.

The first issue of "Colombiana" is director Olivier Megaton. "The Transporter 3" director ruined many of the great moments in that film and he does so here. His complete lack of focus for action sequences and desperate attempts at throwing in "cool" shots completely pulls away from the interesting sequences. A hand to hand fight in a bathroom between our heroine and the sinister henchman is edited so shitty, rarely does the audience have time to discern what the hell is actually happening. He does this throughout the entire film! He does succeed at many of the cut and run sequences, but its not enough and his modern techniques just become an irritating trend.

Secondly, this little film tries so hard to be so serious at times and then goes completely the opposite direction. Random scenes of outrageousness don't fit the vibe of the first three-quarters of the film as it builds this heroine to be the emotional attachment to the audience. "Colombiana" can't find the balance between art and action (like "La Femme Nikita" did in all of its brilliance) to make it work. So by the time the falling action occurs after the action packed finale - we really feel unfulfilled by how it ends.

Luc Besson might still remain a staple of an action fan, but this is one of the few times a film with his name attached is a miss. Really, its not his fault. It's an overrated director and odd focus for the film that undermines any of the strong elements in it. Luckily, I won't disregard my favorite Frenchman for this film. It's just disappointing considering how strong this could have been.