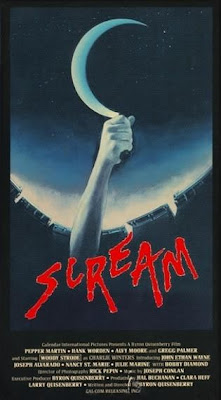 I am not a personal fan of the post-modern slasher era of films jump-started by Wes Craven's 1996 hit "Scream" so it would give me great gratification to tell people that a little seen 1981 slasher that shares it name sake is much better... but I would be lying. This "Scream" is wretchedly written and filmed stalk and slash that I would even go as far to say is the worst slasher from the golden era of the genre that I've seen, even eclipsing such turds as "The Forest" and "Don't Go in the Woods".

We are introduced to a group of hikers canoeing to an abandoned ghost town where they decide to spend the night. Since we know this is a slasher it's safe to assume a killer starts knocking them off one by one.

"Scream" was originally filmed in 1981 as "The Outing" but didn't get wide release until four years later under it's rechristened title. Why is this? Could it be that it sucks? Well if you guessed that then you hit the nail on the head as "Scream" is a horribly written and directed by Bryon Quisenberry who's effort gives the impression of just 'winging it'.

First of all the characters are never established or developed and make some of the most insane, unorthodox decisions known to man. If there's a killer stalking the group then why do they all seem to wander out alone in the middle of the night? Brian Quesenberry also gives the film a slow pace with silted editing and long, boring panning shots. To top it off he never reveals who doing the killing or the motive behind his murders. He tries with a lame potential explanation given by stranger Woody Strode, who wonders into town, but his explanation falls flat and is completely pointless.

With all this other crummy film-making gunking up the screen, at least the film would have slasher essentials like gore and nudity right? WRONG! All the killings are nearly bloodless and most are even off screen. Boobs, another necessity of slashers, are also in zero supply.

"Scream" has a reputation for being one of the worst slashers from the golden era and it lives up to its dire reputation. At least "The Forest" had unintentional laughs and "Don't Go in the Woods" had gore and nudity. All of those ingredients, along with proficient film-making, are lacking in "Scream" only making it extremely boring and overall poor excuse for a horror film. Only watchable for the most hardcore slasher fans. Also released on DVD in a double feature "The Barn of the Naked Dead."