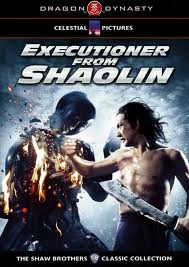 Although the film is significant as being one of the handful of kung fu films to feature the illustrious Pai Mei as a character in its ranks (most of you reading this will probably remember Pai Mei as The Bride's kung fu teacher in "Kill Bill Vol. 2"), "Executioners From Shaolin" is far from being one of the best that either the Shaw Brothers studio or Kar Lau Leung had to offer. It's a fascinating multi-generational revenge flick whose story stands out as a high point, but the film itself is so choppy and awkward getting there that it ruins the entire flow of the film.

When Pai Mei betrays the Shaolin temples and helps the Qing Dynasty begin to tear apart the order of trained martial artists, a handful of escaped students vow revenge against the bushy eyebrowed villain. Hong and his fellow Shaolin students begin to wander the landscape, originally as a troupe of actors/comedies, training for their day of vengeance. Hong meets up a Crane style trained kung fu expert Ying Chun and together they start a life of low key living and raise a son, Wending. Now father and son must combine their wits and decades of training to challenge the all powerful Pai Mei.

There is a great and clear cut villain/hero relationship in this film that I appreciate. A brief appearance by Gordon Liu in the opening fight sequence adds a great start to this film too. It sets up the classic vengeance formula with a strong lead and a vicious villain (who has the ability to pull his private parts up into his body...that's a little odd, but whatever). Even the fight sequences are pretty impressive, it is directed by Kar Lau Leung, as we see the father grow stronger in his Tiger style over time and to see the combination style of the son in the many fights they have with one another as it builds to the final two fights against Pai Mei.

The fights and the main story though can't save the film from feeling a bit awkward when it comes down to how it goes about its storytelling. The film is massively choppy, leaping in time periods of odd structure to get from the beginning to the love story to the son to the ending in a strange chunking pattern. This doesn't allow a lot of time to get situated with each moment as the it rushes through the love story and the training sequences to fit it all in.

"Executioners From Shaolin" is a fun film and seeing the villainous Pai Mei is worth its cost to watch even if its a strangely developed film that suffers from its poor structure (and a very awkward ending moment). Fans of kung fu cinema should see it for its historical context more so than because its a good film. Definitely not one of my favorites, but fun nonetheless.

BONUS RANT: Seriously Dragon Dynasty fucked up with the box art for this film. Originally they misspelled the title (as in the picture above), they had a guy with a sword on the front (there is only one sequence of swordplay and its with a long blade), and on the back it has Pai Mei in a samurai like uniform (of which he never wears in the film). It's like they really wanted to trick those who don't know...

Written By Matt Reifschneider
Posted by DarkReif at 9:37 AM