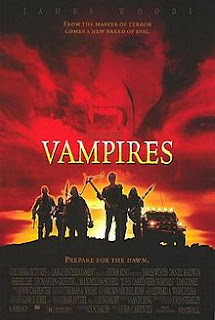 John Carpenter's quality of work might have been on a fallout in 1998 (after the ridiculous "Escape From L.A." and "Village Of The Damned"), the over the top violent and western themed "Vampires" renews a bit of faith in the cult filmmaker. It's not a great film as it tends to play up a few cliches too much and often has to blaze through the plot twists to get all of the necessary moments into the film. On the other hand, its cheesy and very violent fun. That is something that doesn't go unnoticed here.

Jack Crow (Woods) runs a band of vigilante vampire hunters that work for the greater good of God in the church (and a little money on the side). When their latest hunt goes terribly wrong and he loses almost his entire team, Crow will have to team up with a new priest, a bitten prostitute, and his right hand man to bring down the father of all vampires Valek (Griffith) before he is able to complete a long forgotten ritual that will allow vampires to walk in the sun.

Hope you aren't easily offended, because the abrasive nature of "Vampires" with its brutality, religious toned plot, and fairly offensive characters is more than likely going to offend a lot of people out there. Which is also one of the reasons that this film is so much fun. James Woods owns the role of Jack Crow with his balls out attitude towards the church and the undead while the mixture of western motifs and brutal modern horror style blends impressively well. "Vampires" is certain to shock with its grotesque gore (seeing a man cut in half with a karate chop highlights some pretty intense violence in the film) and its guns blazing style only heightens this.

Although the mixture of western cliches and modern horror does create a great cocky atmosphere for the film, it does leave some room where the film falls flat. The characters are all rather unlikable and do some asinine things (the weird love subplot with the prostitute and Daniel Baldwin is ill developed) and the film tends to follow a very predictable structure through to the very end. Once again sort of undermining the very cool concept a bit.

Cult film fans will love "Vampires" for its hilarious one-liners, violence, and ridiculous characters, but outside of that circle film fans will call it out for its simplistic by the numbers storytelling and hit or miss character development. It's not John Carpenter's best work by far, but its better than the direction his material was heading at the time - and its still a blast to watch.