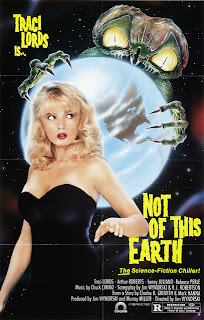 Jim Wyrnorski rivals Jeff Burr and Brian Yunza for the sheer number sequels and remakes they direct. "Not of this Earth" is not a sequel, but a remake of Roger Corman's 1957 no-budget classic (the first remake of several more to come that Corman would finance). Wyrnorski thankfully doesn't make a shot-for-shot update but makes it his own with his own touch of quirky humor that sadly gets overshadowed by the mega-low production values and rushed production schedule.

The plot of the original mixed the vampire and alien genres by having an extraterrestrial visit earth in order to gather blood for his dying race. The basics of this 80s update are the same with our peculiar alien visitor (always wearing sunglasses) hiring the receptionist of a hematologist to administer his blood transfusions. It's not long before she starts to suspect that her new boss is 'not of this earth' as she sees lots of lovely women check in, but not check out.

The main attraction of "Not of this Earth" is not for the fact it's a remake, but he the lure of its controversial star, ex-porn performer Traci Lords in her first legitimate film role. Wyrnorski has always cast attractive women in his films and with the all the attention Lords was getting at the time it was a no-brainer to cast her to cause some media buzz. To my surprise she isn't' half bad, managing to be likeable in her sassy and saucy nurse role. She's also a real looker and her fans need not to worry as she gets neeked and also parades around in a mouth watering blue bikini.

Wyrnorski, after directing the somewhat straight laced "Big Bad Mama II", gets back to more of his self here by making this film absolutely silly and tongue-in-cheek. Quirky camp exploitation films are the name of his game and he does it well as he loads "Not of this Earth" with dorky laughs and lots of beautiful women. What hurts this Wyrnorski effort is the quick production schedule, which was due to a bet Wyrnorski made with Roger Corman that he could make his remake in the same or less time it took Corman to shoot his version (which was a measly 12 days). This is not a good bet my friend! He won the bet by filming it in only 11.5 days and the final results show as the overall product is hindered due to this so-called 'bet.'

Another problem, which plagues many Wyrnorski and later era Corman productions, is the extremely cheap production values. The sets are cheapjack not to mention the props, some which appear in more than one scene and in different rooms. The quick production and low budget also cause a lot of continuity errors, like Tracy lords wearing high heels while nude in one scene and in the very next shot she's not. The film is also LOADED with stock footage from other Corman productions. The opening title sequence is nothing more than a clip show of the more memorable scenes from such films as "Piranha", "Humanoids from the Deep", "Galaxy of Terror", "Forbidden World" among others. Other stock scenes are even worked into the film itself and they stick out like a sore thumb with the newly shot footage.

"Not of this Earth" is an enjoyable camp remake that includes all the Wyrnorski cornball humor one comes to expect from his exploits but it does suffer from a low budget and a quick shooting schedule that all stems from a lousy bet he had with Corman. Traci Lords is uber sexy but I would have definitely liked the film more if more time was put into the final product and if they dropped all the damn stock footage. Stock footage sucks! Corman would later remake the film again in 1997.

Written By Eric Reifschneider
Posted by Cronosmantas at 8:48 PM