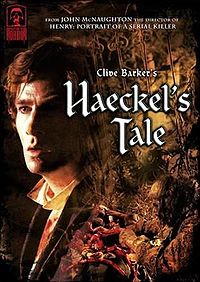 Directed By John McNaughton (who gave us "Henry: Portrait Of A Serial Killer" and randomly "Wild Things")

Late in the 19th Century, a man desperate to be reunited with his dead wife approaches a necromancer to solve his problems. She says she will do it as long as he listens to the tale of caution. A tale about Mr. Haeckel whom on his way to visit his sickly father stumbles upon a family who are plagued by zombies after dabbling with necromancy. Can the tale of Haeckel sway the young man?

This episode of "Masters Of Horror" had two things going for it. It's about zombies. It's based on a short story by Clive Barker. Neither save it from its awkward demise. The main issue of "Haeckel's Tale" is not its quality of special effects - which are impressive to say the least - nor is it the casting which is solid enough. It's simply the silly way that it goes about telling the tale. The tale within a tale structure makes the "twist" ending obvious about half way through. The way the story seems intent on wasting time with Haekel's medical mishaps and long winded skepticism of everything. Even when he finally gets to the house to discover the necromancy in action, it seems to love to spend way too much time in details that seemed irrelevant. This episode would have been much better had it trimmed the fact and focused down.

It has some moments here and there (particularly the special effects), but overall the script is just downright silly in all the worst ways. Logic never seems to rear its head in how the plot progresses and its obvious that McNaughton wanted to focus on elements that would pull in audience members (mainly boobs and zombies) rather than getting the deeper thoughts of the story across. At this time, this is easily my least favorite "Masters Of Horror" episode.