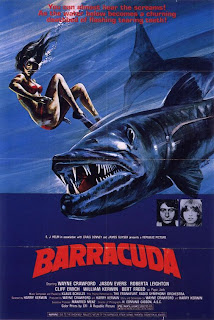 I have seen "Jaws" rip-offs of all shapes and sizes from all over the world. There have been rip-offs from Italy ("The Last Shark"), Mexico ("Tintorera: Killer Shark"), Philippines ("Up From the Depths") and homegrown here in the states ("Orca"). Some stick to the killer shark routine but a number branched out and replaced the shark with piranha, killer whales, giant octopuses and even a fucking grizzly bear. Out of all these different man-eating animals the barracuda seems to be, I don't know, the least lethal and most boring. Guess what.... the film is too.

A chemical plant in a small coastal town is dumping toxins into the ocean which is causing the local barracuda to become man-eating killers. A local marine biologist (Wayne Crawford) and sheriff (William Kerwin) team up and uncover that there more to the story than just chemicals, it seems it's part of a bigger plan called "The Lucifer Project", an experiment overseen by our lovely government.

Though a low rent "Jaws" rip-off, I will give the filmmakers credit for adding more to the plot than just a simple story about killer fish. The cover-up, government experiment subplot is interesting it's just a shame it's handled so poorly in our novice filmmakers hands.

The plot flow is slow and the acting is passable. Wayne Crawford as our 'hero' may very well go down in film history as the most boring, lifeless and asshole protagonist in a horror film. His character treats people like dirt and he's wishy washy about the research he's conducting and doesn't act like there's any hurry to the matter until the very end. Where's Richard Dryfuss when you need him? Cult actor William Kerwin (popular for his work with gore director Herschell Gordon Lewis) seems bored with nothing to do other than to look confused.

Though the plot has potential with its government experiment subplot, "Barracuda" ends up being one of the least entertaining "Jaws" rip-offs I've seen. Hell I even find more entertainment value in silly crap like "Up From the Depths" than this. The effects are decent with some bloody barracuda attacks but fans of these water monster films are better off checking out films like "Piranha" instead. Released on DVD by Dark Sky films as a double feature with "Island Fury".