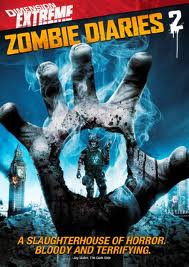 Although mixed reviews got me to view the very disappointing "Zombie Diaries", it was my own franchise addiction that lead me to "The Zombie Diaries 2: World Of The Dead". This addiction has once again lead me into a crappy sequel to the crappy original. The problem with this sophomore effort is that is really never fixes what was wrong with the first one. It suffers from all of the same flaws, the biggest one being how completely boring it is.

Now that the world has completely gone to shit due an outbreak of zombie, a group of ragtag soldiers are bound determined to survive. Their encampment gets compromised so they turn to a random communication that states a few boats will be leaving the UK for safer areas where people are gathering to fight off the zombie menace. In between them and their salvation lies a horde of zombies, bad weather, and bandits looking to pillage. Will they ever make it alive?

I don't want to be too harsh on "Zombie Diaries 2", as it does have some redeeming qualties. Firstly, the general production value of the film is better. It simply looks better and seems a bit more thought out with its more straight forward storytelling. It also helps that directors Bartlett and Gates seem to have a stronger hand with their directing and focus their attentions with greater finesse.

That doesn't quite help it dig out of the massive hole it still creates for itself. "Zombie Diaries 2" will still bore you to death with its slow motion pacing. It moves as fast as the ridiculously slow moving zombies do (at some points its like they aren't even threatening despite how haphazardly people yell and shoot) and with the lackluster acting and awful dialogue to go with it, this film annoys with its half assed executions. It wants so desperately to be taken seriously that it even throws in some rape sequences (yes, that's plural) to try and evoke some kind of emotion out of its audience. It doesn't work. It just seems like it tries too hard at that point.

In all honestly, unless you have to see it because you saw the first one, don't bother with this second attempt at a serious zombie flick. It's boring, forces itself into corners, and can't execute itself on any levels that would make it worth the time invested. Skip it and move onto better zombie flicks.