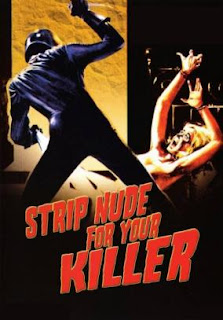 On one side of the Giallo genre you have the edgy elegance of the Hitchcock inspired thrillers among the works of Dario Argento and Mario Bava. On the other side you have... "Strip Nude for Your Killer". As one can tell from the 'in your face' title this firmly belongs on the trashy side of the Giallo genre along with the likes of such 'masterworks' as "The French Sex Murders". As a matter of fact "Strip Nude for Your Killer" very well might be the trashiest the genre has to offer... which can be a good or bad thing depending on what you look for in entertainment.

The simplistic murder mystery plot opens with a women dying during an illegal abortion procedure in which the doctor and an unseen assailant stage it as an accident. A few years later all of the friends and co-workers of the dead women are being brutally killed by a motorcycle masked killer. Now a photographer has to solve the murder before everyone in his agency ends up dead.

Andrea Bianchi also injects plenty of odd comedy into the picture to me it just came off putting when sandwiched in-between violent murders and attempted rapes. Maybe it's a cultural barrier but I found most of the comical elements at odds with the rest of the film and rather annoying.

All of the actors are absolute mediocre but with a mediocre plot they fit right in. The sole person that shines is the gorgeous brunet Edwige Fenech, a veteran of many Gialli including "The Strange Vice of Mrs. Wardh" and "The Case of the Bloody Iris". Don't worry... we get to see plenty of her skin too.

Violence and nudity are an expected element in the Giallo genre but they are usually done with style and pizazz without overtaking the plot. The filmmakers here say fuck the plot, fuck subtlety and go overboard with the female skin in hopes that that exploitative element alone would sell tickets. It worked as many people choose to see this trashy picture due to its title and reputation over much better films the genre has to offer. As an engrossing Giallo this fails but if female nudity is your sole element to judge a films quality then dig in.