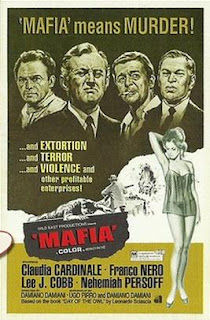 The simply titled "Mafia" (aka "Day of the Owl") is first of three politically charged Poliziotteschi crime thrillers that Italian superstar Franco Nero teamed up with director Damiano Damiani. Out of all three that the two collaborated on (this, "Confessions of a Police Captain" and "How to Kill a Judge"), "Mafia" is my personal favorite despite being the most somber of the three with little action and by far the most difficult to locate on home video.

Taking place in the Sicilian countryside, the film focuses on a personal war between a newly appointed police captain (Franco Nero) and Mafia boss Don Mariano (J. Lee Cobb) who both abide by their own beliefs and ethics and loyalty. Caught in the middle is a beautiful peasant (Claudia Cardinale) who's husband served as an eyewitness to a mafia hit.

This early entry into the Poliziotteschi genre is among the first to deal with the mafia (though it is never mentioned by name) and manages to avoid many of the plot trappings of films to come. Like the other two entries directed by Damiano Damiani this is a somber moving film that goes into great detail about police procedure... an approach that guarantees not much action.

What makes me like this film than Damiani's other films in the genre is the beautiful look provided by visionary cinematographer Tonino Delli Colli, a veteran of films with Mario Bava and Dario Argento, which captures the rustic landscape of Sicily wonderfully. This beautiful look is draped perfectly with a dynamic euro score by Giovanni Fusco.

The cast is also tops with an amazing international cast. A young, mustache-less Franco Nero is assured as the Police Captain and Cardinale is as complex and gorgeous as she was in Sergio Leone's "Once Upon a Time in the West" which was released the same year as this. American actor J. Lee Cobb makes a surprise appearance as the Don proving the films antagonist is just as smart and determined as our hero.

The downbeat ending leaves a lot of questions open (as with most Damiani crime films) and the film lacks action but the amazing cast and professional look makes this a must see for fans of "A" level Italian entertainment that goes beyond the trappings of typical B-grade genre films. Wild East was nice enough to finally release the film on DVD, completely uncut, in a double feature with another politically charged crime outing entitled "I Am the Law."

Written By Eric Reifschneider
Posted by Cronosmantas at 12:56 PM