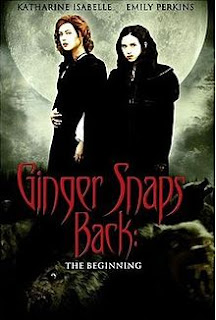 If you follow Blood Brothers regularly then you know how we feel about prequels. If you don't, here's a recap: we already know how it ends, so it better be clever. Thusly I wasn't necessarily looking forward to this third "Ginger Snaps" entry despite my love of the first two. Many of my suspicions of the film were correct, as it seemingly just feels like a historically set first version of the film that tries to incorporate new elements into the tale of the werewolf terrorized sisters' lives, but rarely makes enough sense to legitimize it as a solid enough entry.

Ginger (Isabelle) and Brigitte (Perkins) are two sisters lost in the Canadian wilderness when their parents are killed in an accident. The 19th century woodlands is no place for two young woman and their luck turns when they stumble upon a trading post. Their luck seems thin though as they discover that the post has been repeatedly attacked by werewolves. The few survivors are suspicious of the two girls and when Ginger is bitten by a mysterious boy locked in the cellar...the two sisters may find themselves fighting off wolves on the outside and the inside.

Despite the modernity of their names, our two sisters are just antecendants of the protagonists in the original two films. Don't ask me how the bloodline works or even its relevance, because the film seems to want to skip over that too. Basically, besides the names and actresses, this is a film that could have stood out on its own as a werewolf film instead of one in this franchise. To my disappointment, it lacks the Cronenbergian "physical horror as symbolism for psychological horror" elements and more or less focuses on just being a straight up werewolf film in a timeline context. Not something one looks for in a "Ginger Snaps" film.

Even though it lacks the smarts and charisma of its two predecessors, "Ginger Snaps Back" holds its own as a werewolf film. The special effects are well done (sans the oddly misshapen half wolf boy that never explains why he is only half wolf) and the acting is decent enough to get one through the film. The plot tends to run into a ton of plot holes just in its progressions with the basics ignoring many questions left burning like why do leeches become monsters with the blood or why are the werewolves only prone to attack sporadically if one can claw through the wooden wall so easily. It's these basic plot holes and poor character builds, particularly withe the supporting cast, that leave one scratching their head in bewilderment rather than just enjoying the film for its good merits and rather interesting aspects like the Native American elements.

Is "Ginger Snaps Back" fun? Yeah, its still a blast to watch our two leads battle through werewolves and crazy people as always and, of course, the special effects are solid. Is it even as good as its previous two entries? Not even close. It lacks the smart clever writing and many of the solid acting performances. It feels more like a regular werewolf film than the smartly written and twisty tales that the first two represent. It's fun, but rarely more than that.

BONUS RANT: I also really despise the subtitle to this film. "Ginger Snaps Back" is kind of clever in its own way indicating the prequel nature of the film, but utilizing the word play that made it a great title for the first one. Why throw "The Beginning" on there? The audience are not idiots and we don't need to be told twice that its a prequel. Yeesh.