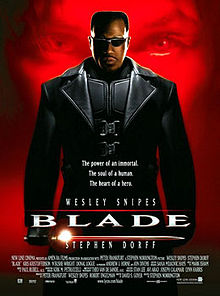 Although I was never a huge comic book nerd, its films like "Blade" that make me want to be. I will admit I am fairly unfamiliar with the Blade franchise outside of the films, but if its anything like the movie then its gotta be kick ass. This film rocks almost every element to the core. It's dark and violent. Quirky. Stylish with directing and completely top notch with its casting. Although Marvel has come through recently with how good its films are, one has to give "Blade" credit as one of the films that started the ball rolling.

In a future not far from ours, the vampires that have survived in hiding so long have taken to the charisma of an up-and-coming Frost (Dorff) to ignite a prophecy to make the vampires the next species dominate over Earth. For every villain there is a hero and Blade (Snipes), a human/vampire hybrid deemed The Daywalker, is armed to the teeth with vampire slaying artillery. As it would turn out, Blade will be the key to defeat Frost or give him ultimate power...

When "Blade" was released, I was 13. I was obsessed with this film. Now watching it a little over a decade later, I still get those same feelings about the movie. The character Blade is simply bad ass. Snipes is the perfect casting for the day walker and Goyer's script may not be quite the A-list film many expect, but it embraces the darkness and comic book ridiculousness to its full benefit. Blade tears through baddies with guns, blades (including his sweet ass sword...err...pig-sticker) and spouts off cold-hearted one liners like no one's business...all while wearing shades and brandishing a badass vest - driving around in a black muscle car. Can you get cooler than that in 1998?

Stephen Norrington ably adds to the style with his modern flourishes. Fast paced action sequences galore with enough violence to please those looking for a bit of horror in the film are established right off the bat. He throws in some low end humor via Kris Kristofferson as Blade's mentor and weapon man Whistler that works for what it is and the rather basic "this is our story through someone thrown into the mix" plot gets it done with its swift pacing.

"Blade" isn't perfect though. It suffers from over use of that hodge-podge late 90s CGI and some rather awkward moments (including a fast-forward driving sequence) that halts the rather efficient pace of the film. Other than that though, its hard for me not to praise this violent extravaganza of comic book awesomeness. It's dark and fun at the same time. A great combination that works for this character that leaves us with one of my favorite action films of the 90s and one that makes Snipes' version of Blade one of my favorite castings ever.

Written By Matt Reifschneider
Posted by DarkReif at 1:34 PM