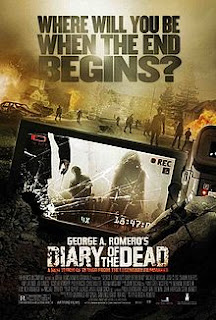 Of all of Romero's "Dead" films, it's "Diary Of The Dead" that certainly evokes the most distress from me. Where as "Land Of The Dead" had a certain charm to it despite its flaws, this low budget "re-imagining" of the initial days during the end of the world has some of Romero's most intriguing ideas and some of the most idiotic moments...leaving a film that is as mixed as my reactions to it. I was either grinning like an kid or grimacing in pain.

When the zombie apocalypse begins to errupt across the world, a group of young college filmmakers lead by idealist Jay (Close) decide to film their journeys home so that others can learn from their successes and mistakes. Their road trip through hell will take them into all kinds of situations including rogue National Guard, militant survivors, and empty hospitals...all the while as they try maintain their own sanity in a zombie infested world.

Although the 'found footage' style of "Diary" certainly takes Romero and his franchise into some new territory, it never left me (as I watched the film) that he could have done it better without the stylistic choice. It hits home the concepts about truth through the eyes of those involved and how spin works in media (those good solid social commentaries that Romero seems oddly able to fit so perfectly into zombie films), but those wouldn't have been lost had he done it as a film without the style. As is, his work in the first person POV can be rather awkward even at its best.

Beyond the stylistic choice in going into the film, "Diary" is also spotty with its script and acting. Our heroes do some pretty silly things without the proper build up to the decisions and many of their trials and tribulations between each other (particularly between our camera man and his girlfriend) seem forced and oddly executed. There are some great moments in the film, just the last act is insanely effective, but for each one of those we have a deaf Amish person with a scythe. Or something equally as awkward and unintentionally funny.

I love the concept of "Diary Of The Dead" and the moments where it works are exceptional, but its too wishy washy in the attempts at getting to those moments. The pacing can be hit or miss, many plot progressions are forced, and the acting can be atrocious at times. Romero worked his way through with charm and commentary on the previous entry, but "Diary" simple fails to find the balance here. A disappointing aftertaste for a great director.