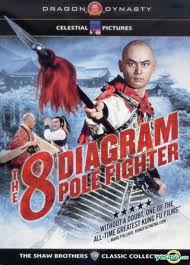 The substantial amount of ass-whipping and tooth removal delivered in The Eight Diagram Pole Fighter is astounding. Even though the film falters on some of it's storytelling aspects, Lau Kar Leung packs in the action, filling this film to the brim with staff battles and an epic tale of betrayal and revenge (is there any other in Shaw Brothers' films?). This leaves a film that's not perfect, but certain to please martial arts' fans with classic sequences.

The Yang family has been betrayed. At a recent battle, the devious Pan Mei set up the seven siblings and their father straight into an ambush that leaves all by two of the loyal staff-wielding sons dead or captured. With sixth brother (Alexander Fu Sheng) slightly demented and unable to grasp the reality of the situation, fifth brother (Gordon Liu) must plot to unearth the traitor and devise the right time to come back and restore his family's name.

The Eight Diagram Pole Fighter has this great epic tale of family woes, political intrigue, and a man desperate for revenge... that never really finds the right pacing. The initial battle (with its pretty obviously painted sets) paints the stage for an epic tale of two brothers, that's drastically cut short due to the death of Alexander Fu Sheng during filming. The obvious missing elements stem from this tragedy and the picture seems desperate to cling to the other lead character (Gordon Liu) to drive the film. This loses the balance of characters that the film strives for in the beginning. From there it seems to try too hard to push dramatic elements which can be successful at times - when Liu performs the shaving ritual for example, but fails at others to strike the emotional connection needed. It's a mixed bag of moments that ripens for some great scenes, but ultimately comes short on delivering the needed emotions to pull it off all the way through.


That's all right though, Lau Kar Leung knows what fans are looking for with a picture like this and the rather hit or miss storytelling ends up secondary to the fantastic martial arts sequences. Initially the film seems to be a bit by the numbers with the fighting, focusing on great staff work and smaller more intense moments (like defending the hunter's shanty), but as the film gets moving...it only gets better. This leads to our final revenge-motivated battle with our hero and sister taking on a small army of fighters. This final fight is so riddled with missing teeth - and you thought I was being odd in the opening paragraph with that statement - and staff fighting that it requires multiple viewings just to take it all in. There are so many people getting asses handed to them and handing them out that it's overwhelming...in all the great Shaw Brother ways.

The Eight Diagram Pole Fighter might be a mixed bag of storytelling that wants to be so much more than it is, but its choreography and fight sequences make up much of the ground for it's plot holes and oddly underdeveloped characters. It's definitely a charming film (perhaps one of my favorites of the Shaw Brothers just in its fun and charming ways) and it's a blast to watch. Martial arts fans will have a riot with it.