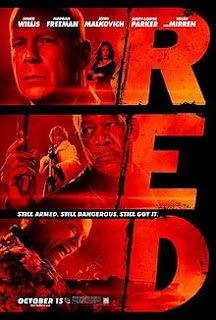 There is a potential in every aspect of "Red" that should get genre fans excited. A fantastic cast, a quirky script, and enough action to shake a stick at. With tongue-in-cheek approaches to story I fully expected to love this film...but as it would turn out, "Red" loves to play it half way the entire time. It smarms its up with enough ridiculousness to tease that inner 'B-movie action fan' in me, but never fully commits to it and plays up some of the more mainstream qualities that would benefit a wider audience. A move that leaves the film hanging in the balance.

When a team of assassins appears on the door step of retired CIA black ops specialist Frank (Willis), the charismatic man of multiple talents has a decision to make. He flees to obtain the woman (Parker) with which he has built up a rather odd relationship with and proceeds to build a team of retired agents to help him unravel a mystery that will lead him into his past and head on with an ambitious new CIA agent assigned to kill him (Urban).

The plot and general idea of "Red" is a riot. Seeing Willis kick ass (as he always does) and partner that with the insanity of Malkovich and seeing Helen Mirren lug around a sniper rifle? This film does strike that fun vibe. When its over the top, its so over the top and its awesome. There is extensive gun fights with bullets spilling everywhere - including the assassination team who tear apart the house in the first gun fight - and the ridiculousness of many of the characters (let's give Malkovich more props here for hauling around a stuffed pig) charms the hell out of the audience. In terms of charm and stylistic action - "Red" is shooting for the kill. Or batting a grenade into a baddie...whatever.

Unfortunately, what happens from there is that it just gets too serious. There is a rather weakly built romantic subplot and the CIA mystery with political intrigue doesn't embrace the outrageousness of the action and characters as it seems like your average "Bourne" motive. The rather basic story undermines the humor and cheesiness by making the film so average and thusly rather unmemorable. It's still fun at times, but it almost makes you want to care about the characters but doesn't go far enough to actually make us care.

By the end of the film, I felt rather apathetic towards the whole thing. It didn't run with the "B-action movie" vibe enough to throw it up into the levels of "Shoot Em Up" or "Crank", but it didn't play the seriousness of its plot or romantic subplots  to levels to get us to care either. It just sort of goes through the motions, occasionally hitting the fun it needed to, but not consistently enough. It's a fun movie, but not something I would claim as one of the best of its genre at all.