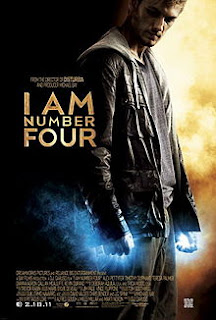 After seeing the trailer for "I Am Number Four" and the massive campaign to bring in the "Twilight" fanbase into this film, I simply had to see it. Call it gluttony for pain. Call it stupidity Call it a waste of time, but a silly romantic teen film set to the background of an alien war being fought on Earth in secret sounds like CW trash that has to be talked about. Particularly when Michael Bay produces. Thusly, "I Am Number Four" was requested for the site by one of our readers and I had the (dis)pleasure of watching this entertaining, but completely question ridden film.

John (Pettyfer) and his guardian Henri (Olyphant) are alien warriors who escaped to Earth from the Mogs, a vicious sharp toothed, gun toting race hell bent on killing all of the nine escaped Loriens like John. They have already killed three of the young super warriors and John seems to be number four on the list. When they catch up to him in Ohio, he might have to stay and fight instead of flee to protect his new found love (Agron).

The 'teens in love with extraordinary circumstances' might be silly to those not in that time of their life, but its hard to say that "I Am Number Four" didn't pull the best talent to make it work. Writers from "Smallville" and "Buffy The Vampire Slayer" craft the film and the stylistic way the film uses the script very much reminds one of those two television series and director DJ Caruso seems to handle the massive amount of cheesy moments and CGI special effects with relative ease. The young heart-throbs that grace the cast (no...not Tim Olyphant) are enough to make any readers of Tiger Beat magazine swoon. In these ways, its hard to argue that "I Am Number Four" doesn't do what it intended to do.

The problem is that, despite some valiant efforts, the film ultimately makes little sense and sincerely feels shallow. The chemistry of our cast is rarely seen (particularly between our two romantic leads), the subplots of high school rivalries and friendships aren't built enough, and many of the science fiction elements seem to come out of left field. A sudden relevance to a mysterious dog with massive CGI consequences seems completely random and the appearance of Number Six at the end (which was an obvious attempt at adding in more action and the threading of a franchise) leads to some great battles, but makes absolutely no sense. These odd science fiction moments are fun, but completely asinine. Not something fans of the genre want to see.

At the end of the film, Micheal Bay's aura is certainly felt on the film with its high octane action (that is a load of fun) and rather inept plot structures. It's certain to please those that love that teeny surface level quirkiness, but for the rest of us it's a rather interesting concept wasted on Hollywood fodder.