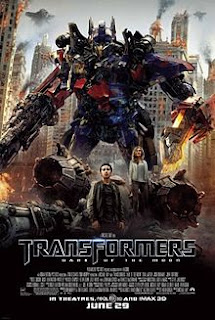 My horrible disdain for the second "Transformers" film certainly played a role in how long I waited to watch this third entry with perhaps the worst sub-title known to man (dark WHAT of the moon?! Dark side? Dark hole? Dark stupidity? Dark what?!?!?!) and despite my sheer anger at the plot holes of part two, its hard to say that this third entry didn't improve on it. I wasn't angry, but then again, I really wasn't anything with this one. My fear in the first film turned to anger with part two and finally spun itself into apathy for part three. It doesn't help that a rather flat and over-epic script and Michael Bay's directing did nothing to reaffirm my interest in any of the characters or their fates. The simplistic word 'meh' aptly describes my experience with "Transformers 3".

Sam (LaBeouf) has been trying to restart his life since the epic world saving events of of the last film. He's got a new girlfriend (Huntington-Whiteley) and he is desperately looking for a new job. When his new job mysteriously links him to some information about a crashed Autobot spaceship on the dark side of the moon, he has to once again call upon his Transformer friends to thwart a Decepticon plan to revive their lost planet Cybertron.

It's hard to say whether I actually liked "Transformers 3" or not. I had no investment into it. To it's benefit, Michael Bay does what he does best (again). He has a lot of visually assaulting high octane action sequences where very big robots fight other bigger robots. Granted, much of the charm of watching these bots battle it out while wrecking cities has already started to get old and this film rarely adds enough new to capture the imagination again sans a rather odd use of a giant robot earthworm that seems poorly used by the Decepticons. At times there are some very cool moments with Bumblebee thrusting Sam from the front seat to turn into the robot only to catch him and turn into a car before he hits the ground, but the style of the film isn't enough to fill in the gaping holes of logic or poorly executed concepts in the film.

This brings me to what has plagued this franchise since film one. WHERE IS THE THOUGHT IN THIS MOVIE? Our characters are once again poorly developed (despite some being three movies now) and some characters are there in random moments - I'm looking at you John Malkovich - who mean nothing to the plot or give substance to the tale. The actual plot is kind of interesting with the history of the war between the Transformers coming to the present, but rarely makes a lot of sense. Government cover-ups? Massive Decepticon/human alliances? This film feels like it should have followed the first one as it rarely even acknowledges the events of the second film (that's okay, I try to forget it too) and never explains certain things that needed to be addressed for this plot to work.

"Transformers 3" at least doesn't throw in the frustratingly awkward moments like the second film did, but it didn't necessarily fix the problems that have plagued this franchise. It still has very weak characters (when you're best actor is CGI robot you know something is wrong), the humor is rarely effective, and the plot is still massively plot hole riddled. It has some good action pieces including a very long winded finale, but its not enough to win me over yet. Too much style over substance still. Maybe if they put Jason Statham in the next one I will be excited.