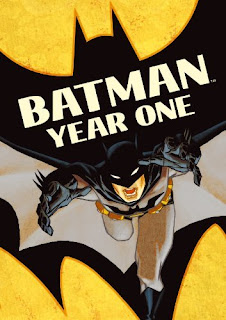 DC animated films have seriously been far better than their live action counterparts. No offense to Christopher Nolan and the very awesome directions he has taken Batman in his films, but these animated features that focus on our favorite Dark Knight are beyond well done. Even though "Batman: Year One" takes the character into some very interesting directions (it is based on the graphic novel co-written by Frank Miller of "Sin City" fame), this latest adventure of Batman doesn't quite touch on the previous one "Under The Red Hood". Doesn't mean this noir take on Batman's first year of kicking ass isn't a blast to watch for fans though...

Bruce Wayne has just returned to Gotham after a stint of training. He has decided to fight against the scum of the city with his own skills. At the same time, an idealistic Gordon has just been transferred to the police force with his newly pregnant wife. These two men are about to find out what it takes to do what is right when it comes to fighting the corruption in Gotham...one will take justice in his own hands as the other fights to make the people of this city want the justice for themselves.

There are some very unique aspects about "Batman: Year One". Firstly, the film takes a very dark and noir style to how it tells its story. The obvious Frank Miller style of writing is up front in this animated feature with a ton of voice overs for the characters and the very adult oriented themes. The film touches on prostitution, bribery, adultery, police corruption, violence, adult language....the list goes on. The PG-13 rating might be a little light (I know...CRAZY!) and the dark themes and concepts leave Batman in the dark storytelling that makes him my favorite superhero. This part of "Year One" is very well executed.

Secondly, the film does an interesting twist and makes Gordon one of the main characters. In many of the animated features he is left as a supporting character, "Year One" places him up front as a collaborator and comparison to the Batman origin story that we all know too well now. This is a hit or miss aspect of the film though as it takes away from the mysteriousness of Wayne/Batman and takes away from some of his screen time. It's an interesting take on mythos of Gotham and one that fans will enjoy, but it does take away from our favorite hero.

On top of that, the film does have a rather intriguing animation style. An odd combination of Anime and old school American, it gives the feature a rather mixed look too. At times it works, but some of the computer generated moments seem forced and make for awkward sequences. It does give the right feel for the script and general feel for the feature and that works for it.

"Batman: Year One" might not be the expertly executed and fantastic "Under The Red Hood", but its such a unique take on the Batman mythos that its hard for fans not to enjoy it even if the action is minimized and the the screen time shared with Gordon. It might be as hit or miss as "Gotham Knight", but its hard for the Batfan in me not to be stoked with this film. Mostly for fans only though...definitely not for kids.

Written By Matt Reifschneider
Posted by DarkReif at 12:27 PM