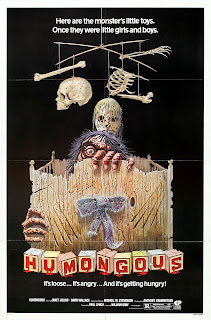 Back in 1982 the word "Humongous" was a rather new and proved to be good fodder for a horror film title thus this Canadian slasher was written around that term. So we get director Paul Lynch, hot off the success of "Prom Night", returning to give the slasher genre another stab with not as congenial of results despite a promising premises.

A group of dumb-ass teens crash their fathers yacht off shore of a mysterious island only rumored to be occupied by a senile old woman and a pack of wild dogs. Well it seems that the women was raped 35 years before and the residuum of that encounter was a deformed child that grows up to be a "humongous" wild haired madman. The thing dabbles in cannibalism and since his mother's demise roams the island looking for food.

A wilderness madman was nothing new in the genre thanks to "Friday the 13th Part 2" inspiring such slasher off-spring as "Madman", "The Burning" and "Don't Go in the Woods" but what makes this one stand-out in the bunch is the unique setting of a remote island. This adds to potential suspense as our group of young adults are trapped, with no-where to run.

The wild hairy monster itself is nothing special or unique and Paul Lynch wisely keeps the thing unseen in the shadows for the most part. Clever use of shadows is the name of the game for Lynch as he drapes the creep old house and woods in darkness again adding for potential suspense.

I use the word 'potential' as Lynch sadly misses many marks to make this truly scary. The climax, if you want to call it that, is unexciting without jumps or scars, despite the clever use of shadows.

The acting is nothing special and rather poor for the most part making the characters nothing more than cannibal fodder for the slaughter. Seriously this group of teens is some of the most unlikeable I've seen in the glory age of classic slashers. One jackass even aims a loaded gun at his brother, playfully saying he's going to blow his brains out. Fuck these guys... let them become cannibal food.

"Humongous" is worth hunting down for fans of the genre as it has been rather hard to find until it's recent DVD release by Scorpion. It had major potential to be a suspenseful thriller but mostly falls flat thanks to shit characters, bad acting and a director that is unable to craft true suspense. Don't expect a slasher among the ranks of "The Burning" and you will find some entertainment value to insure it won't be a 'humungous' letdown.